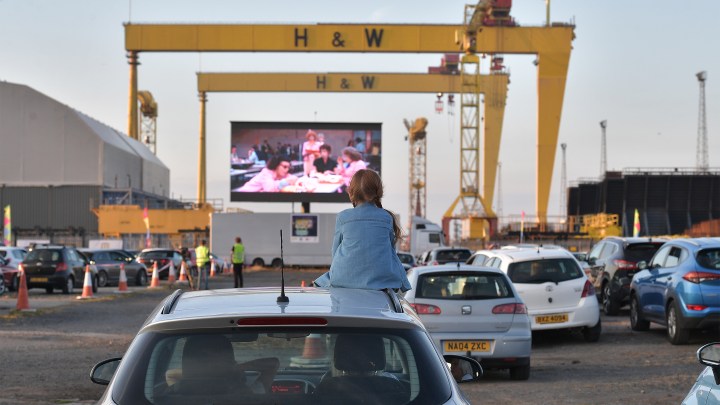 In Europe, COVID-19 has been breathing new life into an American cultural relic. Drive-in movie theaters, which reached a peak of popularity in the United States in the 1950s and then went into a long decline, have cropped up in a number of European countries in the wake of the pandemic. The appeal of this form of entertainment at this time is obvious: social distancing is much easier to achieve in a drive-in than in a regular cinema.

The latest iteration of what the organizers call “safe cinema” is scheduled to open in a car lot outside a major exhibition center in the northern British city of Manchester later this summer. Tickets will be sold online, all the cars will be parked 2 meters away from each other and visits to the restroom will be strictly controlled.

“This will be an entirely contactless event,” said Vickie Butterworth of One Agency advertising firm who’s organizing the shows. “I think it’ll be a raging success. It ticks all the boxes from a safety point of view in a time when people are still a little bit dubious about what they can and can’t do, where they can and can’t go, who they can do it with. I think it’ll go down a storm.”

Actual storms might be a problem. Manchester is one of the rainiest places in the United Kingdom. But Butterworth doesn’t think that will put off many customers.

“I’m not going to lie, the weather is pretty horrid here most of the time, but look, northerners are pretty well-equipped to deal with the rain. Northerners are tough. They can handle it. And I think the rain might even add to the atmosphere a little bit,” she said.

Not everyone is equally enthusiastic about the drive-in.

Andy Pates of Go Cinemas, which runs open-air movie shows across the south of England, has his doubts about the drive-in model. Watching a movie from under an umbrella is one thing, he said. But watching it in a car in a downpour is something else.

“You’ve got to start the wipers going. Now sometimes you get that awful screeching sound on the windshield, which is going to be very off-putting,” he said. “Also, the slanted windows in modern cars will automatically limit the view of the screen. And people on the rear seat of the car will have head rests to contend with.”

Pates is not impressed with the Manchester plan to beam the movie soundtrack into the car radios on an FM frequency. He fears that might drain car batteries and mean that many of the vehicles will have to be towed away from the venue at the end of the show.

“I’m not trying to be pessimistic,” he insisted. “I’m just pointing out some of the practical difficulties with a drive-in.”

In Manchester, Vickie Butterworth is undaunted. With three large mobile screens arranged around the venue, she’s confident that everyone will be able to see the show and that many Brits will enjoy the nostalgic feel of the event.

“Many of us remember the famous drive-in scene in the movie “Grease,” so it’s a pretty familiar concept,” she said. “I think after all the frustrations of lockdown, this will be a lot of fun.”

Drive-thru exhibits could be more than a pandemic trend