COPY
A house being built in Phoenix. Residential construction fell 4.5% in May due to the COVID-19 pandemic. Justin Sullivan/Getty Images
COVID-19

A house being built in Phoenix. Residential construction fell 4.5% in May due to the COVID-19 pandemic. Justin Sullivan/Getty Images
Listen Now

Among the economic data out this week: Spending on construction projects fell by nearly 3% in May. That figure from the Census Bureau may not sound terrible, considering that residential building saw a bigger decline: 4.5%. But behind those numbers, there are a lot of lost jobs — almost a million in an industry that hadn’t fully recovered from the last recession.

Earl McPherson has been a carpenter in New Jersey for 28 years. When the pandemic shut down a lot of construction in mid-March, he lost his job installing floors at the American Dream shopping center in East Rutherford.

Aside from a couple of days helping to build a temporary hospital for COVID-19 patients, he was out of work for six weeks.

“I was fortunate enough that we had savings, and I’m very grateful for that,” McPherson said. “But it’s all gone now, so now we have to build it back up.”

He’s back at work now building a veterinary hospital, but more layoffs are likely. Ken Simonson is chief economist with the Associated General Contractors of America. In the group’s latest survey, 40% of firms said at least one expected project had been canceled.

“I do expect that many more construction firms are going to have to lay off workers as they finish up current projects,” Simonson said.

That’s a big change from just months ago, when the industry was facing a labor shortage. Rob Dietz, chief economist of the National Association of Home Builders, said more than 400,000 residential construction workers lost their jobs last month.

“And that represented about 14% of the workforce,” Dietz said. “More discouragingly, it represented almost half of the job gains that we had picked up since the end of the Great Recession.”

And, as happened then, he worries that some workers who lose their jobs now may never come back. Mark Altobelli is back on the job in Youngstown, Ohio, after six weeks of being unemployed. While he was off, his employer sent him $200 a week to supplement his unemployment benefits.

Between that and not having to pay for child care, he said, he actually came out ahead.

“I probably went back to work and took roughly a 30% pay cut,” Altobelli said, laughing. Still, he said he’s happy to be working. 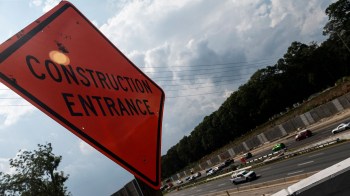