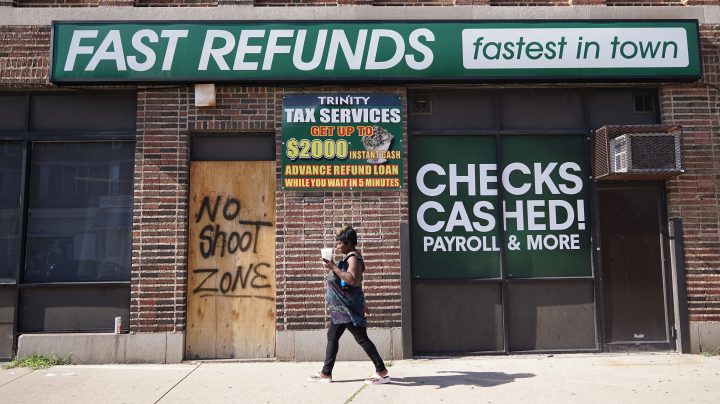 COPY
A boarded storefront with a graffiti plea to end shootings in west Baltimore in 2017. Baltimore benefited from funding through the Clinton administration's Empowerment Zones, but much of the city remains plagued with poverty. Mandel Ngan/AFP via Getty Images
Race and Economy

A boarded storefront with a graffiti plea to end shootings in west Baltimore in 2017. Baltimore benefited from funding through the Clinton administration's Empowerment Zones, but much of the city remains plagued with poverty. Mandel Ngan/AFP via Getty Images
Listen Now

As protests around the country shine a light on economic inequality, there will be calls for more investment in disadvantaged neighborhoods. Speaking at the Kennedy Space Center on Saturday, President Donald Trump said that building up distressed communities is a “top priority” of his administration.

Marketplace host Kai Ryssdal talked with Kimberley Johnson, a professor of social and cultural analysis at NYU who studies urban politics, about how the federal government has tried to do that in the past. The following is an edited transcript of their conversation.

Kai Ryssdal: So as I said in that introduction, there will be calls for and need for investment in some of these cities that have been damaged. The American government has tried this before, right? Give me the highlights, would you?

Kimberley Johnson: Sure. I mean, I think there’s been several decades, many decades of investment in urban areas, ranging from say, the 1950s and 1960s, which really focused on direct investment in people and places… [to the] 1970s, particularly the 1980s and 1990s, where we shifted away from direct spending to indirect spending, like tax expenditures and tax credits. So that’s where we are right now… much of our sort of investment in poor areas is via these indirect mechanisms of tax credits.

Ryssdal: Right. And those are the Empowerment Zones, as they were calling them in the Clinton administration, [and] the Opportunity Zones in the 2017 tax bill. Here’s the question, though: Does what we’re doing now, these tax incentives, does it work?

Johnson: It’s very mixed. I think that [to] the extent that they can work, they are places where there’s a lot of close collaboration between investors, local governments, community groups, that really are focused on what works best for a particular community. Where it doesn’t necessarily work is where something is built on the assumption that if we build it, people or businesses will come, and then that doesn’t quite happen.

Ryssdal: Yeah, “Field of Dreams” was a great movie, but maybe not so much in real life. Let me ask you this, though, if the results are mixed, and that’s widely known, why do we keep doing this? Why don’t we try another way? And what would that way be, that might be better?

Johnson: I think we do this largely because of inertia. Other policy people call them “zombie policies.” They are politically attractive to both Democrats and Republicans. It also doesn’t require a lot of upfront government money, which is key. So it’s not that a bureaucrat or government official is pocketing money. It could be that, you know, business took the money. And then later we find out five years later, oh, they didn’t really do what they were supposed to do with it. So I think there’s a lot of ways in which these programs are attractive to politicians because they kind of kick any potential problems or costs kind of down the road.

Ryssdal: So what’s your gut telling you, Professor Johnson? I mean, this is a series of protests and actions by people on the ground that we haven’t seen in 50 years. Does your gut tell you it might be different or not?

Johnson: I think that, you know, this is a 1-2 punch. The shutdown really revealed, I think, the vulnerability that many families found themselves in. I think the statistic came out last year that many American families had [only] $400 in cash on hand. And if you live in a place like New York City or San Francisco, that $400 was like a week’s worth of rent. And so I think one of the issues looking forward is that people have to feel that they’re safe, that they have a future, that they have hope. And I think having these incidents with the police on top of economic and real emotional distress of what we’ve been going through — I mean, this has been a hard month or two for many people. It’s kind of the last straw, in some ways.