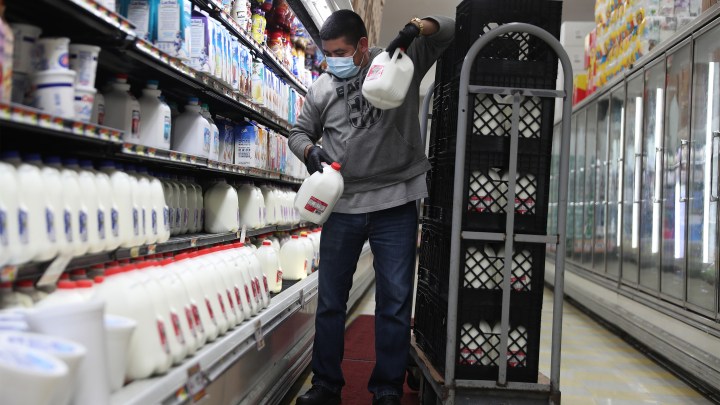 COPY
An employee restocks milk at a grocery store. Some businesses are seeing strong demand during the pandemic and increasing staff hours. Joe Raedle/Getty Images
COVID-19

An employee restocks milk at a grocery store. Some businesses are seeing strong demand during the pandemic and increasing staff hours. Joe Raedle/Getty Images
Listen Now

The pandemic is hitting American workers hard — every day there’s more bad news about layoffs, furloughs and pay cuts. A new Marketplace Edison Research Poll showed that among those who are still employed, more than a third have had their hours cut. But 16% are actually working more hours than before.

Houston electrician Mike Cargill is one of them. Home electricity usage has surged during the lockdown, and so has his pay.

“Because people are at home watching TV or plugging their laptop in different areas to work from home and realizing, ‘Oh my goodness, this outlet doesn’t work,’ ” he said.

Meanwhile, his fiancee, who works in marketing, and his dad, who consults in the oil fields, are out of work. “It is definitely strange,” Cargill said.

Every recession has winners and losers, said Julia Pollak, labor economist with job site ZipRecruiter, but the juxtapositions caused by this economic shock have been extreme.

“This is like nothing we’ve ever seen before,” she said. “Job postings have fallen 47%. At the same time, it has caused sales and user growth to soar in some other businesses,” like grocery stores, e-commerce and pharmaceuticals.

Though big companies like Amazon and Walmart are hiring to meet increased demand, she said more businesses are simply increasing hours for existing staff.

But not all of those workers are getting paid more, said Jed Kolko, chief economist with job site Indeed.

“It’s one thing to want more hours, get more hours and get paid for it,” he said. “It’s something else entirely to have to work more hours just to get your same job done for the same pay.”

That’s the case for Carolyn Behrens, a middle-school English teacher in Richmond, Virginia, who has revamped her curriculum for remote classes and switched to more one-on-one sessions for students with learning disabilities.

She estimates she’s working about two extra hours a day. But as an already overworked teacher, she stopped keeping track.