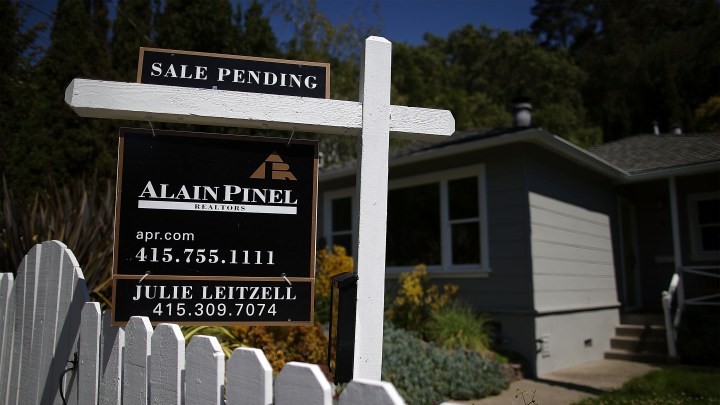 Sales of existing homes fell by 8.5% in March, according to the National Association of Realtors. That’s the biggest monthly drop in more than four years. Sales were down in all four major regions of the country, and especially in the West, where they dropped more than 13%.

You know what didn’t fall? Prices.

Nolan Hahn of Denver has a pretty good incentive to buy a house right now: a local program for first-time homebuyers.

“There’s a $20,000 grant for assistance for a down payment if I buy it this year that I’m not eligible for next year,” he said. That’s because he’ll earn too much to qualify after a scheduled raise.

But Hahn isn’t seeing much for sale.

“A lot of the listings have dropped off is what I’ve been told,” he said.

That falling inventory helped push prices up in March. Nationally, the median sale price was up 8% from a year ago.

“Sellers may have been more spooked over COVID-19 than buyers,” said Ralph McLaughlin, chief economist at Haus, a housing finance company. “Home inventory now is about 1.5 million. That’s the lowest for a March on record.”

Since March, more potential buyers have lost jobs and stay-at-home orders have restricted in-person showings. Nancy Vanden Houten, a lead economist at Oxford Economics, expects sales will fall further this month and next, “when they’ll more fully reflect the widespread lockdowns that have been in place throughout the country,” she said.

But people still need to move. And they’re getting creative about it.

David Demres is planning to relocate from Alexandria, Virginia, to Atlanta next month for his job at a software company.

“This was supposed to be the month that I would go meet Realtors, see a bunch of houses and spend a couple weekends there looking at neighborhoods,” he said.

Instead, he’s checking out houses on FaceTime. His real estate agent texted him a video of her driving to one house to show him what the neighborhood looked like.

He made a bid on that house over the weekend — under asking price — but his offer was rejected.