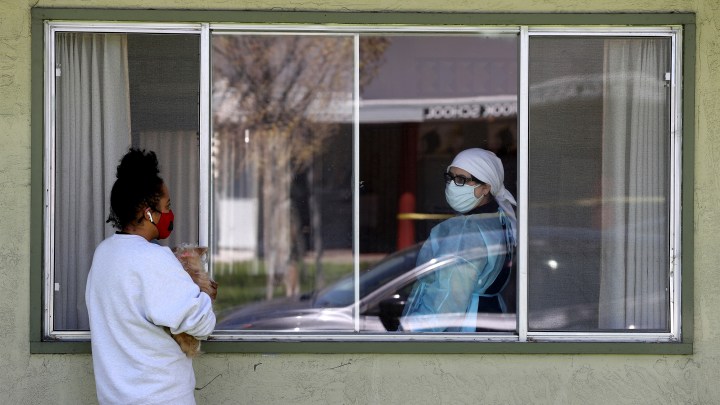 In some cases, they are choosing to quarantine with their clients.

Anna Castillo is a personal care attendant who has been working with her client, a 74-year-old woman with debilitating arthritis, for more than two years. Castillo helps her out of bed in the morning, bathes her and prepares meals.

In recent weeks, Castillo’s shifts have gone from six hours a day to 24/7.

“I’m just keeping everything under control, checking to see if she’s OK, if she doesn’t have a temperature, making sure that she takes her medication and all of the vitamins possible and avoids the world outside.”

Castillo lives just north of Boston in Chelsea, Massachusetts, with her husband. But in mid-March, she decided to move in with her client in South Boston to reduce the risk of carrying COVID-19 into her client’s home.

Even though her paycheck doesn’t reflect her new schedule, she said she felt she had no other choice.

“How long do I plan to stay? As long as it’s necessary. She wouldn’t be able to survive on her own,” Castillo said.

As a personal care attendant, Castillo is considered a direct-to-consumer home health worker and she’s paid by Mass Health, the state’s Medicaid program. She makes about $15 dollars an hour, pays out of pocket for her own health benefits and says she’s still only getting paid for six hours of work a day.

Castillo is one of more than two million home health workers in the U.S., according to PHI, a national advocacy nonprofit.

According to Rebecca Gutman with the service workers union 1199SEIU, the home health care workforce is made up largely of immigrants and women of color.

“It’s heroic work during normal times, and during the pandemic there’s a lot more fear among home care workers as they’re going to work,” Gutman said.

Unlike Castillo, many of these workers are still commuting. They often take public transportation, live in substandard housing and get by living paycheck to paycheck.

The service workers union is collecting and distributing masks and gloves for home health workers but, said Gutman, it’s slow going, due in large part to the national shortage.

“Given the ramp-up of positive COVID-19 cases in nursing homes right now, probably the safest place for elders and people with disabilities to be right now is in their homes,” said Gutman. But, she stressed, that means home health care workers must have a way to protect themselves.