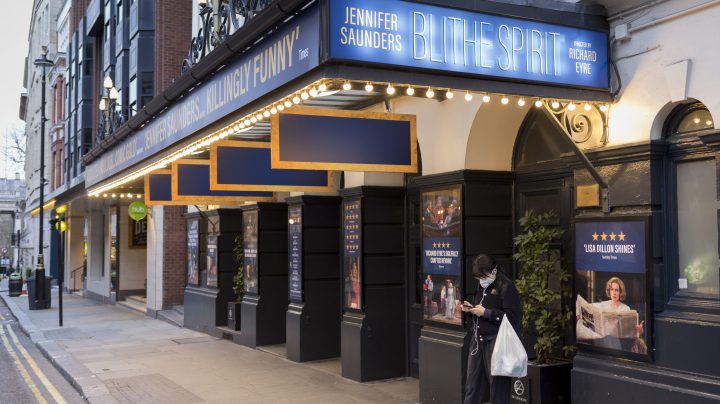 COPY
The West End of London on a midweek evening during the coronavirus lockdown. Richard Baker/In Pictures via Getty Images
COVID-19

The West End of London on a midweek evening during the coronavirus lockdown. Richard Baker/In Pictures via Getty Images
Listen Now

For many workers in the age of coronavirus, paychecks have been hard to come by as economies all over the world grind to standstill.

That’s especially true for entertainers who work on stage in productions like musical theater and opera, which depend on the public gathering in glittering halls to take in performances night after night.

After theaters in New York and London closed their doors to help prevent further spread of COVID-19, work dried up, and hundreds of thousands of performers were forced to look outside their industry to cover living expenses.

In London, where leaving the house to make necessary food purchases is permitted, some actors have found jobs in their local grocery stores stocking shelves, working the cash registers and making sure customers follow the one-in-one-out policies.

She had a contract for a performance slated for June and July, but when the city shut down in March due to coronavirus, so did her work.

“The worry was: What am I going to do? Not just financially, but sanity-wise,” Harvey said. “I live for singing. And to suddenly not be able to do that was very scary, indeed.”

Lara was able to find a job at a local outpost of German discount supermarket chain, Lidl.

It’s a similar story for Thomas Inge, who works as a musical theater actor in London’s West End.

He was due to go on tour for “Saturday Night Fever” when the city went on lockdown. So, he turned to Tesco, where he worked as a butcher and fishmonger as a teenager.

“It’s a huge amount of change, but it’s nice to be busy. That’s what I’m most grateful for,” Inge said.

Both Inge and Harvey said when they signed their work contracts, neither were exactly sure how much they’d agree to be paid.

“When I was offered the job, I hadn’t even finished applying online. And I got the call straightaway saying, ‘Can you come to the store at two o’clock today to sign the contract?’ And I thought, ‘That’s amazing, I need the job, yes,'” Harvey said. “It took about 45 minutes. And that was that. I just assume I’ll get paid at the end of the month.”

For Inge, it was a similar story, but he says he’s just happy to able to rely on a steady paycheck and do his bit to help the community until life gets back to normal.

“We’re keeping the stores open because we’re there. We’re filling in for the people who aren’t able to work at the moment, who have to self-isolate,” Inge said. “And to [the customers], that’s a huge deal. And they’re so grateful. Whereas to us, we’re so grateful to have a job.”

On April 6, the Society of London Theatre announced London’s West End theaters would stay closed until at least the end of May and until there is further clarity on city-wide policy from the U.K. government. On that same day, Dominic Raab — the U.K.’s first secretary of state who is standing in for prime minister Boris Johnson as he recovers from a hospital stay due to COVID-19 — said it’s too early to consider an exit strategy for the country’s lockdown. But, he noted, the measures were “beginning to work.”

Though there’s no guaranteed timeline for when the performance industry will get back to business as usual, both Inge and Harvey say they’re eagerly anticipating the chance to break a leg back on stage.