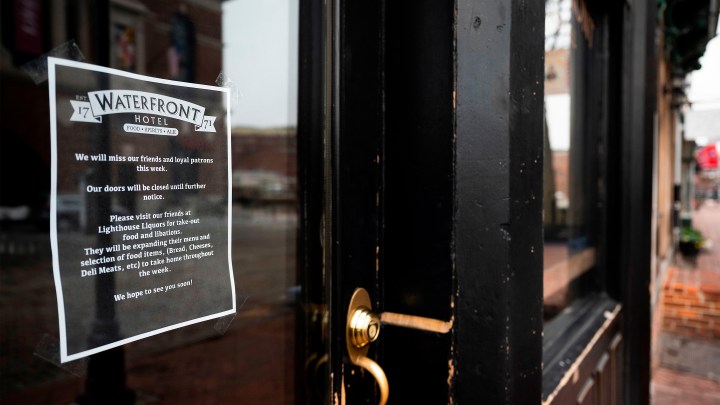 COPY
Job listings are down in hospitality and travel during COVID-19. Above, a note of closure on the door of the Waterfront Hotel in Baltimore, Maryland, on March 19. Jim Watson/AFP via Getty Images
COVID-19

Job listings are down in hospitality and travel during COVID-19. Above, a note of closure on the door of the Waterfront Hotel in Baltimore, Maryland, on March 19. Jim Watson/AFP via Getty Images
Listen Now

Thursday morning saw another week’s worth of astronomical layoff numbers in the Labor Department’s report on first-time claims for unemployment benefits. The number is 6.6 million. There may have been 3.5 million of those claims last week.

Friday, we’ll get the monthly jobs report for March. Usually, that’s a pretty good indication of how the economy’s doing. This time, it’s going to be outdated the minute it’s released.

The monthly jobs report is based on a survey of households and employers. But last month’s tsunami of furloughs and layoffs hit after the Bureau of Labor Statistics finished its research. So it won’t be reflected in this month’s report.

William Rodgers, professor of public policy and chief economist at the Heldrich Center for Workforce Development at Rutgers University, said he expected the unemployment rate to soon surpass the Great Recession high of 10%.

“What is so chilling is that that took several years to get to,” Rodgers said. “We are potentially going to almost double that in one to two months.”

For a real-time snapshot of the labor market, Nick Bunker at Indeed.com is watching new job postings, which so far are down 15% from last year.

“Folks who lost their jobs aren’t going to be able to find many opportunities as there are just fewer new jobs available,” Bunker said, adding that postings are up in health care and down in fields including hospitality, travel and software development.