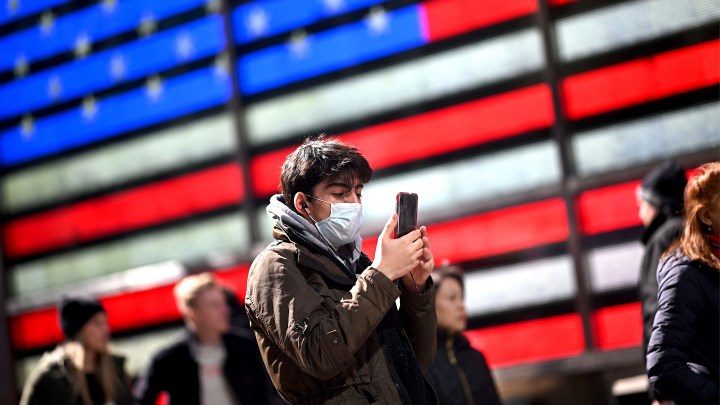 COPY
The Weather Channel app has a new tool that lets users track reported cases of COVID-19 near them. Johannes Eisele/AFP via Getty Images
COVID-19

The Weather Channel app has a new tool that lets users track reported cases of COVID-19 near them. Johannes Eisele/AFP via Getty Images
Listen Now

If you use The Weather Channel app, you might have noticed a new tab for COVID-19 next to daily forecast and radar. The IBM-owned app company has a new tool that lets users track reported cases of the illness in their local areas and other counties and states.

It’s just one of the ways that tech companies and researchers are working to collect and analyze data on the disease.

I’ve been watching IBM’s app, known as The Weather Co., obsessively today — watching the number of cases in my home county, Los Angeles, tick up to 799.

“We are sourcing information from multiple government sources, down to a county level,” said Sheri Bachstein, global head of consumer business at The Weather Co.

Harvard and Boston Children’s Hospital developed another tracker, covidnearyou.org. It crowdsources symptoms people enter, even if they haven’t had a COVID-19 test.

China, South Korea and Taiwan have been using cell phone location data to trace contacts among individuals in affected areas.

“Norms and expectations about this differ from country to country,” said David Lazer, professor of political science and computer and information science at Northeastern University in Boston. “But in the U.S., I think it would be unacceptable to share identified individual-level data.”

Nina Fefferman, a researcher at the University of Tennessee, Knoxville, said that for this pandemic, we’re likely past the point where tracking tools can inform mitigation or containment plans.

“For next year, or as this goes forward, hopefully everything calms down a bit, then these kinds of tools are really wonderful for complementing medical surveillance,” Fefferman said.

She does have a caveat: when sharing data about local outbreaks, education and context are crucial to prevent people from being more worried than they need to be.