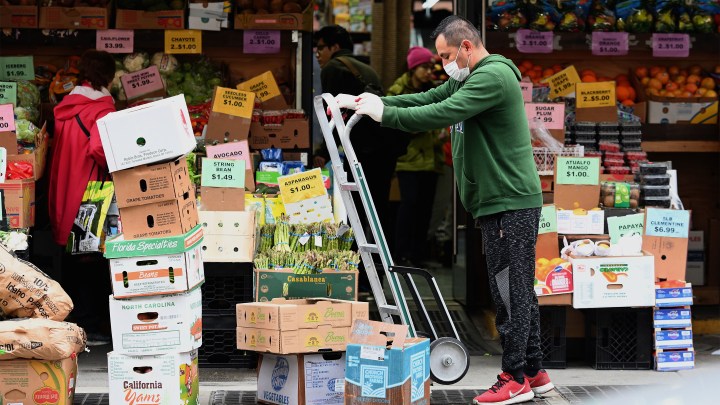 Most of us have been told to stay home, to socially distance. But there are many people who can’t do that because their jobs keep the rest of us going. Among them are grocery store clerks, who are currently working under very difficult conditions.

“People are absolutely panicking,” said Brittney Legowski, who works about 40 hours a week in the grocery pickup department at a Walmart in Menomonie, Wisconsin. “Things are flying off the shelves. We’re extremely low on canned goods, baking supplies, all that sort of stuff.”

Legowski, 21, is also a local leader with the retail workers advocacy group United for Respect. She said tensions are getting high at her store. One customer berated her coworker because he’d ordered toilet paper and there was none left. “And he refused to leave until a manager talked to him about it and she was screamed at to the point of tears.”

Legowski and her coworkers are panicking too. They’re worried about getting the virus. “I have a lot of anxiety about this, but at the same time, it’s at the point where a lot of us just can’t afford to be scared.”

In the midst of a public health crisis, grocery store workers have become essential employees. In fact, several states have just made that status official.

Ryan Lockwood, 24, works part-time as a cashier at a Publix supermarket in Cleveland, Tennessee. He never imagined he’d be in a situation like this.

“I knew that retail work gets busy, especially around holidays, but something that I feel like I’m risking my health and the health of people around me to do, that wasn’t even a consideration,” he said.

His wife, Aubrey has fibromyalgia. “Every time I go to work, I risk bringing the virus back home. And so that weighs on me,” he said.

Lockwood said he’s trying to be careful. He’s been using hand sanitizer between every customer. But the way some customers are talking worries him; they complain that everyone’s freaking out for no good reason.

As afraid as he is, Lockwood has been going to work. He and Aubrey have bills to pay.

Publix has announced that it will give employees paid sick leave if they get the virus, or symptoms of it, or are quarantined. Walmart will also give paid leave under certain circumstances.

Walmart has also said it’s giving bonuses to store associates and trying to hire 150,000 workers to keep up with demand.