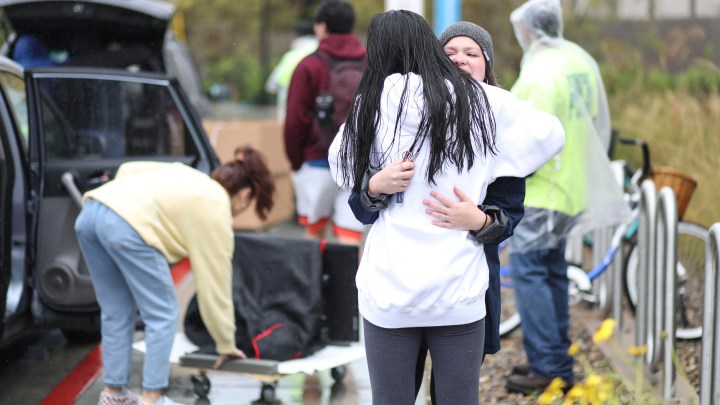 Students are worried about more than just whether or not commencement will happen. Some have uncertain living situations now that campuses are closing. Sandy Huffaker/AFP via Getty Images

Students are worried about more than just whether or not commencement will happen. Some have uncertain living situations now that campuses are closing. Sandy Huffaker/AFP via Getty Images

Wednesday, March 11 was a whirlwind for Martha Tejeda — as it was for millions of other college students in the United States.

Her school, Wiley College, a historically black college in Marshall, Texas, with a student population of 1,400, was just the latest in the country to announce it would be requiring students to leave campus amid concerns about the COVID-19 pandemic.

Tejeda was left wondering where she was going to live after she moved out of campus housing by March 23. She was unsure what kind of job she would be able to find, being in the country on a student visa, now that her work-study was in jeopardy. And she didn’t know when she’d next return to her home in Juarez, Mexico, 12 hours away by car.

Then there was this: When would she have time to start applying to scholarships for the Texas Tech University graduate program that she had just been accepted into on the very same day that all of this chaos struck?

“I found out [Wednesday, March 11], when all of this happened, you know, the meeting and everything. There was a light, which was that I got accepted into grad school,” Tejeda said.

It’s a time of mixed emotion for college students across the country dealing with COVID-19 disruptions on campus: concern about staying safe, uncertainty about future living and working situations, sadness about leaving behind friends.

“A girl that works down in the office here at Wiley, she reached out to me as well and told me, ‘If you need anywhere to stay, just tell me.'”

Even with Tejeda’s graduate school acceptance, which affords some level of stability, it’s still unclear what the immediate future will look like as she’s mandated to leave behind the place she’s called home for the last four years.

Tejeda says she’s stayed on campus in the past during various school recesses, since her only real source of income is a work-study job. She can’t always afford to buy a bus ticket or rent a car, and in the past she has carpooled to make the trip home to Mexico.

This time around, Tejeda feels fortunate to have the support of her community.

“Thank God I have people around Marshall that have helped me, people from my church. A girl that works down in the office here at Wiley, she reached out to me as well and told me, ‘If you need anywhere to stay, just tell me,’” she said. “I have this friend that, she will let me stay in her apartment for free.” And friends have been sending her money on Cash App.

Students on the Medford/Somerville, Massachusetts, campus of Tufts University banded together to coordinate similar relief efforts just after the school announced officially that it would be requiring people to leave campus early, by Monday, March 16 at 3 p.m. The official statement from President Anthony Monaco came on Tuesday, March 10; that same day, students like Marley Hillman and, soon after, Grant Gebetsberger, both juniors at Tufts, organized Tufts Mutual Aid to provide students in need with things like money for plane tickets, storage space and food.

“I think that the mood went from this kind of, ‘Oh, I’m really sad to be ending this semester so early’ — and especially for our seniors who, you know, this is a horrible end to their Tufts career — the mood really started to shift on Tuesday when we were facing this kind of inevitable email announcement,” Gebetsberger said. “People started to really think about, there are a lot of students who, going home isn’t easy or an option, either financially, either family situation-wise, or, you know, they’re from a place that’s actually being affected much worse by COVID-19 than Boston.”

So Hillman and Gebetsberger created a Google Form that students, alumni and other members of the community can fill out with what sorts of support they had to offer. Students looking for assistance could then access a read-only spreadsheet, scan the resources available and contact contributors whose offerings matched their needs.

About 24 hours later, over 600 people had filled out the Google Form offering some kind of assistance, and, according to Hillman, the monetary distribution handled directly by the Tufts Mutual Aid was $5,130. That’s not counting individual peer-to-peer donations that the Aid’s spreadsheets helped facilitate, which accounts for a sizable portion of the aid. Hillman estimated the total amount of coordinated monetary aid was over $10,000 at that point.

That’s crucial, because, according to them and Gebetsberger, just plain cash is what a lot of people need right now, especially for those who may have had to stop working an on-campus or nearby job.

“There are so many other pieces beyond just the travel home, of what the interruption to their daily lives and daily income here will be,” Gebetsberger said. “They just need money to make ends meet for the costs of life.”

The group is also helping to coordinate clothing and food donations for students who might be leaving campus and have things they won’t be taking with them.

All of this relief effort is happening alongside university-run initiatives; Tufts has been promoting the Mutual Aid group in official communications, just as the Mutual Aid group has been pointing folks to the college’s “Unexpected Hardship Fund for Student Needs.” That fund, which has so far raised more than $82,000, is handled by the Tufts FIRST Resource Center, which develops resource networks for Tufts University’s first generation, low-income, and undocumented populations.

Per an announcement on March 11 that Tufts Student Life issued, housing fees will be prorated, with credits issued to students’ accounts. Additionally, Tufts partnered with UPS to provide shipping and storage options at a low cost for students currently in university housing.

“Our focus is supporting students’ immediate needs given the extraordinary situation created by COVID-19, including helping students who are unable to afford travel or certain other expenses and have no other options available to them,” said Patrick Collins, executive director of media relations for the university.

But, between the first announcement of classes moving online and the follow-up message about financial support, there were still around 20 hours of uncertainty for the students who wouldn’t be able to just pack up a car and drive home on short notice. Students have been critical of the fact that Tufts did not immediately release information about aid at the same time it said students would have to leave campus.

“Those first several hours were absolutely the most critical, as panic mounted. People started immediately booking tickets, that kind of thing,” Hillman said. “Like, a rapid response needs to be rapid. And we stepped in to create that where Tufts was not as swift as many students needed it to be.”