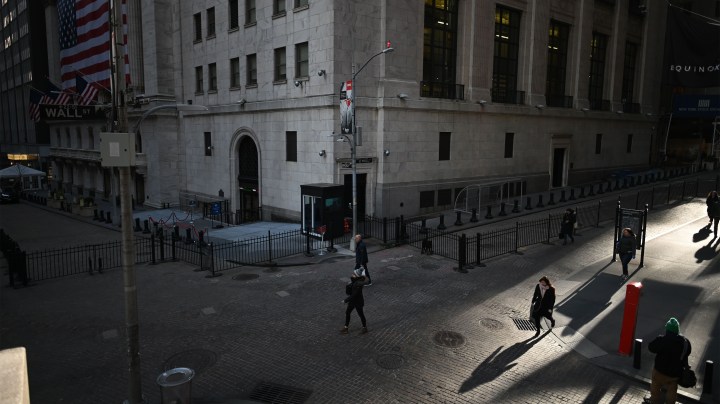 COPY
People pass the New York Stock Exchange on March 16, when trading was halted for the third time in a week. Johannes Eisele/AFP via Getty Images
COVID-19

People pass the New York Stock Exchange on March 16, when trading was halted for the third time in a week. Johannes Eisele/AFP via Getty Images
Listen Now

President Donald Trump acknowledged Monday that the economy may be headed toward a recession as a result of the COVID-19 pandemic. Is this a virus-related recession, or is it the one economists said was on the horizon?

The recession that economists have been predicting was in part because we’ve been in the middle of the longest boom this economy’s ever seen.

“Whenever we’re in a boom, there’s an impending recession because we know that we experience business cycles in the U.S. economy,” said Andrea Eisfeldt, an economics professor at the UCLA Anderson School of Management.

Both economic booms and economic slowdowns come to an end eventually. Eisfeldt said that the recession we’re in now is “primarily being driven by the health shock that we’re experiencing.”

Keep in mind that there are different types of recessions and recoveries. Unofficially, there are “V-shaped” and “L-shaped” recessions.

“When you think about a V-curve, it is exactly like you picture,” Eisfeldt said. “You have a fairly sharp drop, and then a fairly speedy recovery.”

An “L-shaped” recession is “an even steeper decline and a very prolonged recession,” she added. That’s basically how the Great Recession played out. The key to understanding the recession we’re headed into is understanding the difference between the “V” and “L” shapes.

“We do know some things about the deeper recessions,” Eisfeldt said. “Those recessions are the ones that seem to come along with credit events: corporate defaults, corporate bankruptcies, as well as layoffs.”

If you understand the difference, you know what to watch for.

In the last economic recession, Treasury Secretary Henry Paulson explained what it was going to take to calm things down.

The Trump administration announced its own version of a bazooka Tuesday. Almost a trillion dollars in stimulus, including direct cash payments to all Americans making less than $1 million annually.