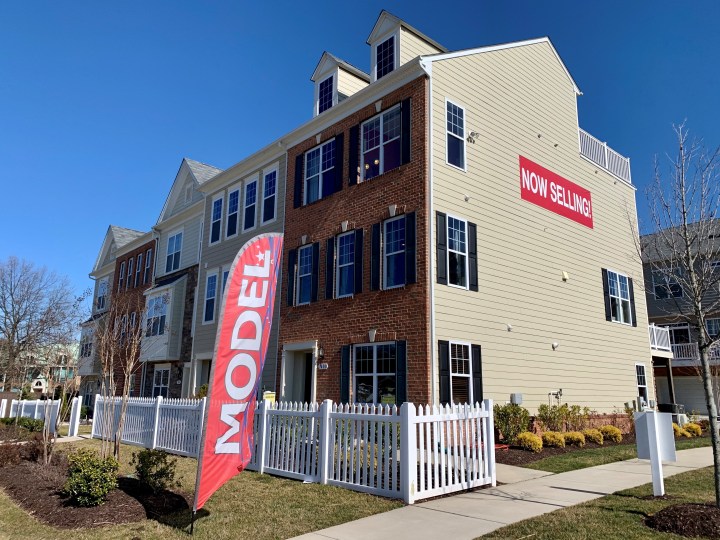 COPY
A new development in Lanham, Maryland, where rowhouses start at $355,000. The builder chalks up about 11% of that price to regulatory costs. Amy Scott/Marketplace

A new development in Lanham, Maryland, where rowhouses start at $355,000. The builder chalks up about 11% of that price to regulatory costs. Amy Scott/Marketplace
Listen Now

The high cost of building is one of the main reasons we hear builders say they’re not keeping up with demand for affordable new housing. There’s land, there’s labor … and there are government regulations.

According to the National Association of Home Builders, regulatory costs account for almost a quarter of the final sale price of a new home. We decided to visit a single house in a suburb of Washington, D.C., to add it all up.

That house, the Foxglove, is a three-story townhome in Lanham, Maryland, built by Timberlake Homes.

John Minzer is president of the family-owned business. “I married the boss’s daughter,” he said. “That way I didn’t have to work. 42 years ago.”

The Foxglove is the less expensive of two models in this brand new development of 138 homes, Wood Glen. It has three bedrooms, a balcony and a big bright kitchen. “It normally comes with hardwood all the way through,” Minzer said. “You also get the stainless steel kitchen.”

But, according to Minzer, baked into all of those expenses is almost $40,000 in government fees. “It really drives up the cost of housing,” he said.  “It’s really crazy. That’s all I can say.”

Some fees are pretty straightforward. About $15,000 is for the school district, because more housing means more students. Another $7,400 pays for fire, police and emergency medical services.

Then there’s the toilet, which costs about $5,000 for this house. Not the actual toilet, which runs about $130 at Home Depot. But the local water and sewer authority has fees for each fixture hooked up to the system.

On top of the explicit fees are government mandates that help make Wood Glen unique, but also drive up the $150,000 construction bill. Like the oddly precise requirement that 64% of the exterior be brick. The rest needs to be a special siding called HardiePlank. Both are more expensive than vinyl siding. Why? County officials “like the way it looks,” Minzer said.

He also had to shell out about $2,000 per unit for recreation space, including play areas for kids and a grassy space with benches and a white pergola. He figures he could have built another four or five houses and brought the overall costs down. “I don’t know anybody’s ever going to sit out here,” Minzer said. “I mean, those are the type of things that I’m saying I think they could use a little bit better common sense of.”

This is where the developers writing the checks come up against the government employees who write the rules. Officials say fees for things like schools, public safety, the sewer system and other infrastructure are all based on the premise that growth should pay for growth.

“New development creates a need for services in the community, and the county has to have a way to pay for those,” said Derick Berlage, deputy planning director for Prince George’s County.

As for the pergola, Berlage said yeah, it’s about aesthetics. “It’s a balancing act,” he said. “No one wants to put in place requirements that will restrain good development from happening, but on the other hand communities don’t want to see low-quality development, either.”

Minzer understands that desire, but wonders if letting buyers decide would be more cost-effective. “I’m not going to knock [government officials] completely because I understand what their goal is,” he said. “Their goal is to make livable communities and make it look very good.”

But if county leaders want to make housing more affordable, “you could probably eliminate a whole lot of that stuff,” Minzer said. “If I put up a crap box, nobody’s going to buy my house.”

Some relief may be on the way. The county council just passed a new zoning ordinance that opens up more land to building and gives developers more flexibility in whether they use, say, HardiePlank or cheaper vinyl.