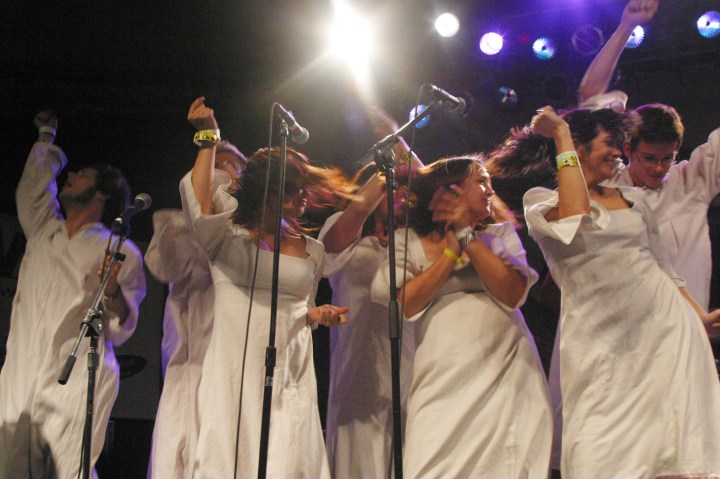 The Polyphonic Spree (not a cult, but definitely cult-y) at SXSW in 2004. Jana Birchum/Getty Images

The Polyphonic Spree (not a cult, but definitely cult-y) at SXSW in 2004. Jana Birchum/Getty Images

You may hear the word “cult” and immediately think of the Manson Family, but consider crossfitters. “Little Monsters.” At one point in history, Protestants. There’s a lot of cultiness all around us.

“It’s challenging to define a cult because, classically, I think you would define a cult as a destructive group with an unchecked charismatic leader,” writer and linguist Amanda Montell said. But influence takes many forms, she said, and the word “cult” could describe lots of groups, “from the most unethical and destructive to the most ethical and constructive.”

Every mainstream religion was at one time considered a blasphemous cult, Montell said. It’s a spectrum. And as younger generations trend more secular, Montell said, they’re looking for meaning, purpose and unity in places like workout classes and fandom. To say nothing of all the cult-centric movies, TV shows, books and fashion that have been so hot the past couple years.

“We are absolutely fascinated by it,” Montell said. “Because I think on some level, we all know that we are to a degree a member of some cult, even if it’s just the cult of Instagram.”

That also means for a lot of Americans, a job isn’t just a job anymore. One survey found 42% of respondents defined themselves through work, and the number was even higher for people under 40. In the Harvard Business Review, executive coach Manfred F. R. Kets de Vries wrote last year about how the things that make a work culture positive and rewarding can curdle into the sort of exploitation, isolation and groupthink found in some damaging cults.

“I think companies have always engaged in the sort of deception and exploitation that cults are known for,” Montell said. “but I think some of the some of the almost evangelical … enthusiasm, chants, uniforms and things like that are new and I think some of that has to do with our general fascination with cults.”

“This Is Uncomfortable” host Reema Khrais interviewed Montell in researching this week’s episode, about our relationship with work and how it shapes our identities. She’s working on a book about the language of cults; her dad spent his high school years in one. We asked her to share a few red flags that your work might be getting a little too cult-y.

The buzzwords go too far

In Montell’s last office job, there was a lot of lingo. People would throw around acronyms or use words in weird ways.

“I just remember using a lot of verbs as nouns and nouns and verbs. So, whiteboard became whiteboarding, learning became learnings,” she said. “Just these ways of switching around parts of speech to create a certain formal or know-it-all effect.”

Just about every workplace has some kind of specific lingo. You might “loop in” a colleague on a project, or use a meeting to “level set.” Corporate speak isn’t inherently bad, Montell said, but it can send the wrong message. Euphemisms can paper over serious problems, she said, and a shared language can manipulate employees into staying loyal.

“You, just by knowing these words, are special, and you must remain special and that’s why you must continue to work at this company.” she said.

This goes back to office lingo, but more specifically covers the type of phrase you encounter everywhere: a thought-terminating cliché.

Think “boys will be boys,” or “it is what it is.” A thought-terminating cliché dodges questions and stops the conversation cold. At work, you might hear about taking a conversation “offline.”

“I’ve heard that in … corporate environments too, like, ‘Let’s offline about that,’” Montell said. “The boss figures you’ll forget about it later, right? And that can slowly but surely cause employees not to question things anymore.”

When it’s deployed too often, Montell said the thought-terminating cliché can stifle dissent and distort the reality around a company — or a cult.

Work takes care of everything

An on-site gym, catered lunches or after-work happy hours can be attractive perks. Montell said she’s heard of employers going even further, offering massage therapists or hair dressers. But when employees start to feel like they have no reason to leave work at all, all those amenities start to look sinister.

“Google has a ball pit in the middle of their HQ, because they want to create this sense that like, this is a fun, magical place where you can stay forever and ever and ever,” Montell said.

It’s a sign the company is trying to control how much time and meaning you get outside of the office, Montell said, making it harder to leave for the day … or forever.

“That contributes to the high exit cost, once your whole life is invested in this company,” Montell said. “Then suddenly you feel like you cannot leave it because who’ll cut your hair?”

Cultiness at work isn’t limited to white collar businesses or Silicon Valley tech giants. Walmart store employees have been doing some kind of cheer at work for decades.

Sales associates chant the name of the store, or cheer for the previous day’s sales. You can find countless videos on YouTube, and complaints from self-identified employees on the Walmart subreddit. Attendees even do the cheer in multiple languages at shareholder meetings.

“A chant is something that you can get someone to do so quickly, in order to start grooming them a little bit,” Montell said. “Unlike shaving your head, or getting a new uniform or moving to a different location, [it’s] quick and seemingly non-committal.”

A chant is a useful first step for indoctrinating someone in a company or a cult, Montell said. There’s peer pressure to conform, she said, and humans are “wired” to enjoy social rituals.

“All of a sudden you’re bonded with these people, and you don’t even know why,” she said. “And all it took was, like, a little chant, you know?”

There are tons of rules

When was the last time you read your company’s handbook? What happens if you violate a rule? Do you live in fear someone will catch you slipping?

“I think an overly controlling overly stringent code of conduct can be a red flag,” Montell says. “And Disney is definitely a company that comes to mind.”

WeWork banned meat from its offices in 2018, and said it wouldn’t approve non-vegetarian expenses anymore. Critics mocked the policy at the time, but after the company’s collapse it looked more like the whim of a CEO with a cult of personality.

For more on WeWork and the history of how we got obsessed with our jobs, listen to This Is Uncomfortable.