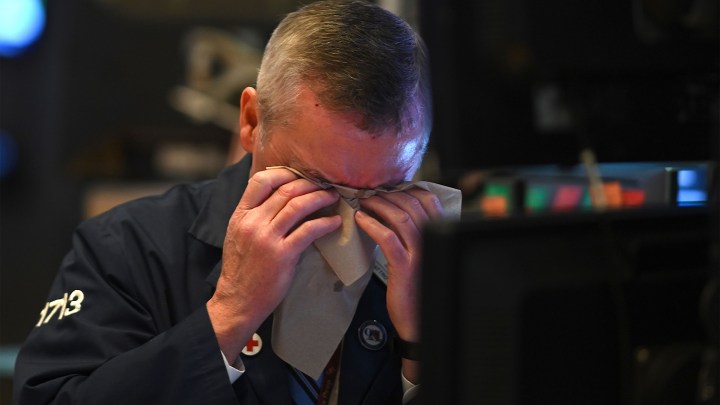 COPY
There's evidence that the more markets go up and down, the more they are driven by emotion. Johannes Eisele/AFP via Getty Images

There's evidence that the more markets go up and down, the more they are driven by emotion. Johannes Eisele/AFP via Getty Images
Listen Now

Wall Street continues its wild ride this week. The Dow fell nearly a thousand points Thursday, more than 3%. So to recap this week: Monday the market flew up a whopping 5% before cratering 3% Tuesday. Then it soared 4.5% Wednesday before Thursday’s plunge.

By one measure, stocks have not been this volatile since the financial crisis a decade ago. Surely the main fear is COVID-19, but for traders and analysts addicted to data, there’s not enough of it.

How long will the outbreak last? Uncertain. Are Chinese factories back? Hard to know. How will this hit company earnings?

“They’re just saying, ‘We’re not even giving guidance, because we have no idea what is going to happen,'” said Liz Ann Sonders, chief investment strategist at Charles Schwab, a Marketplace underwriter. “So in terms of how Wall Street prices stocks and markets, analysts have their hands in the air.”

Then there’s election-year uncertainty, resulting in market swings based on which candidate happens to be up at the moment.

When markets struggle to predict the future — which is their job, as stock prices are based on expectations of earnings — they gyrate, according to George Pearkes, macro strategist at Bespoke Investment Group. It can go like this: When investors sell and sell, and expect the worst, a little ray of hope can change everything.

“If every piece of news is bad for a while, expectations come down,” Pearkes said. “And now that expectations are down, it doesn’t take much good news for everything to flip into reverse.”

In this moment, consumers stocks are often riding the bungee up and down, as consumption is one of the big unknowns in the midst of the epidemic.

“Whether it’s apparel, devices, online entertainment, streaming, if consumers are more willing to spend money on that because they’re less fearful of catching the virus, then those have tended to do better,” Scott Wren, Wells Fargo Investment Institute senior global market strategist, said.

Still, looking for specific causes of volatility can only go so far, as the market is a big, complicated place. Studies suggest long periods of calm can, somehow, lead to volatility. And there’s evidence that the more markets bounce up and down, the more they get driven by emotion.