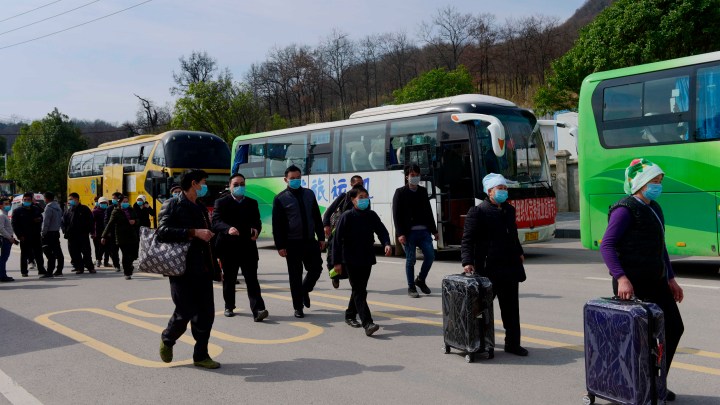 COPY
Migrant workers wearing masks walk to their buses in Jiangxian County, in China's Guizhou province, before departing to return to their jobs in Guangxi region. STR/AFP via Getty Images
COVID-19

Migrant workers wearing masks walk to their buses in Jiangxian County, in China's Guizhou province, before departing to return to their jobs in Guangxi region. STR/AFP via Getty Images
Listen Now

Migrant workers make up about one-third of China’s vast workforce, and COVID-19 has put them in an especially tough position. These are Chinese nationals — lower middle class to working poor — who live tenuously in the cities, but whose official home base may be far away.

The Economist’s Beijing bureau chief, David Rennie, has been reporting on this. He spoke with Marketplace’s David Brancaccio. The following is an edited transcript of their conversation.

David Brancaccio: I met a guy from the sticks in central Maine, who drove to work as a dock worker at the port of Newark, New Jersey, 400 miles each way. He would work for two weeks and then a week off, back home. Is that kind of what we’re talking about?

David Rennie: It is, although in some ways, it’s even more extreme. There’s about 170 million Chinese who work a long way from home. Some of them, many of them, will spend kind of 11 months away, and they might go back typically for Chinese New Year, which is the very beginning of the year. They might go home for a couple of weeks. The thing that’s happened this year that makes this year so strange, is that they got home and then the virus kicked in. And so people who were expecting to be home for 10 days or a couple of weeks, some of them are still there almost two months later.

Brancaccio: Now some can’t get back because they might work in a factory that’s inside a quarantine area?

Rennie: That’s right. I went to the province of Sichuan a couple of weeks ago to do a column on this for The Economist, and spoke to a woman who, every morning, has to check her smartphone because she cleans in an office block in Beijing. And here in Beijing, a lot of office blocks are still half-closed or completely closed. It’s all those kind of service sector jobs, those factory jobs, as you say. And then, in some cases, if they do go back to that coastal town with a factory, and they go back into that rented room that they share with maybe three other migrant workers, they’re going to have to do a couple of weeks of quarantine, where they can’t leave that shared room and they won’t be paid for that two weeks. So they’ve got really tough economic decisions, as well as safety and health decisions, to make right now.

Brancaccio: So to get back to work, you might have to endure a quarantine. But you’re not going to get paid in most cases?

Rennie: That’s often the case, and they’re not paid for the holidays either. So it is true that in one way they are more resilient than say their working poor equivalents in the United States. So they wouldn’t typically have kind of car loans or credit card bills or mortgages. In fact, a lot of even the poorest Chinese, they save 20% of their salary, even 30%, 40% of their salary. And so, at the moment, they’re living on their savings. And if they’re back in the village, they’re eating, you know, food from their neighbors, eggs from the guy around the corner, vegetables from the plot of land that their grandmother owned. And so they can live quite cheaply, but not forever. And people are spending their savings and that’s really tragic, because the reason they save so much is because there aren’t the safety nets that we have in the rich world. So they’ve got really tough decisions to make about how long to stay in the village.

Brancaccio: In the capital Beijing, the absence of many migrant workers is being felt nearly everywhere.

Rennie: Beijing is ⁠— actually, strangely enough, although the state media keeps telling us that the overall number of infections in China is going down, the rules here in Beijing are getting stricter and stricter. And that’s because this is the national capital, it’s the seat of the party and the government, this city cannot be reduced to chaos. And because it’s a big city that has millions of migrant workers that make it hum, the party and the people who run the city, they’re kind of paralyzed. They have a big dilemma. So if you’re an official who runs, you know, the local neighborhood […] you’ve been told, “Save the economy, get back to work, make sure that we don’t have a terrible year. But if there are any new infections in your district, you’re fired, or worse.” And so what we’re seeing is extremely strict movement restrictions and checkpoints and temperature checks, really even stricter now than last week.

Brancaccio: And then, if you go about your business in Beijing, you are noticing the absence of the migrant workers in certain cases?

Rennie: Absolutely. It’s now, there’s a bit more traffic. The metro is still empty, people are too frightened to go on the metro. You don’t see kids, because people are too scared to let their kids outdoors, the schools are still closed. But people aren’t sending their kids to the park or the playground. And those migrant workers who would normally be maybe working in restaurants, or in barber shops, or in those service jobs in the big cities like Beijing or Shanghai, so many of those small service industry, shops and restaurants things, they’re just closed right now. If you do find a restaurant that is open, you’re only allowed two customers per table. More than that is deemed a health risk. My own office building where The Economist bureau is, they rang the first thing to say, “Are you coming back this week? Because if you do, you can only have one-third of your normal staff in the office. And we need to know where all of them have been for the last two or three weeks before we let them through the door.” So it’s very, very jumpy, and that plays against all of those instructions from the top of the machine to get the economy back to normal.