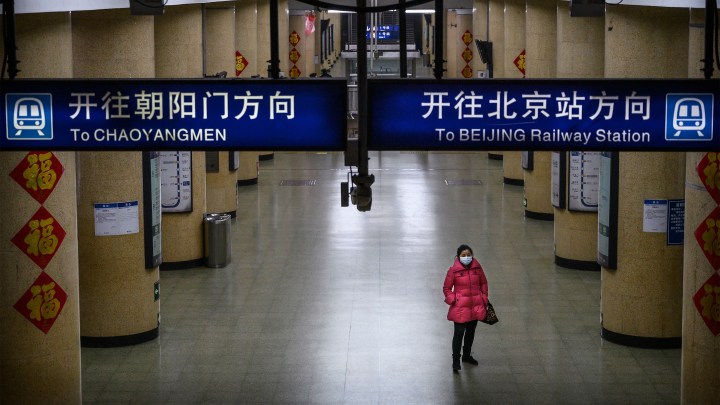 COPY
A woman wears a protective mask as she waits on an empty subway platform during the evening rush hour on Feb. 3 in Beijing. Kevin Frayer/Getty Images
COVID-19

A woman wears a protective mask as she waits on an empty subway platform during the evening rush hour on Feb. 3 in Beijing. Kevin Frayer/Getty Images
Listen Now

China took steps Thursday to further deescalate the trade war. Its government announced it would reduce tariffs on more than 17,000 U.S. products as part of the phase one trade deal.

These tariff cuts will kick in Friday, the same day American tariffs on some Chinese products are set to be reduced. This is an incremental step in the implementation of the phase one deal but context is key: This move comes as China grapples with the continuing fallout from coronavirus.

The human cost of the outbreak is growing; hundreds of people have died from the virus and and tens of thousands are sick.

Wendong Zhang, an economics professor at Iowa State University, said the risk that China’s economy might not grow as fast this year has markets questioning whether the virus will specifically impact China’s ability to implement the U.S.-China phase one deal. He said that’s part of the reason China is reducing tariffs.

“This step brings in some certainty and shows China’s willingness to continue to carry out the promises in the phase one deal,” Zhang said.

The White House has expressed concern China might need to delay some parts of the deal, like promised purchases of U.S. agricultural products.

Joshua Meltzer, a senior fellow at the Brookings Institution, said those purchases had people scratching their heads even before the virus outbreak.

“Effectively, the deal requires China to double purchases, and it’s not clear how this is going to be done,” Meltzer said.

Not just because there may not be enough market demand in China but also because U.S. farmers need to ramp up production.

“That depends on not just the investments they make and in their seed and fertilizer and all those things, but the vagaries of the weather,” said Matt Slaughter, dean of the Tuck School of Business at Dartmouth.

Slaughter said whether China can stay on track with the phase one deal objectives will depend on the ultimate human and economic cost of the coronavirus.