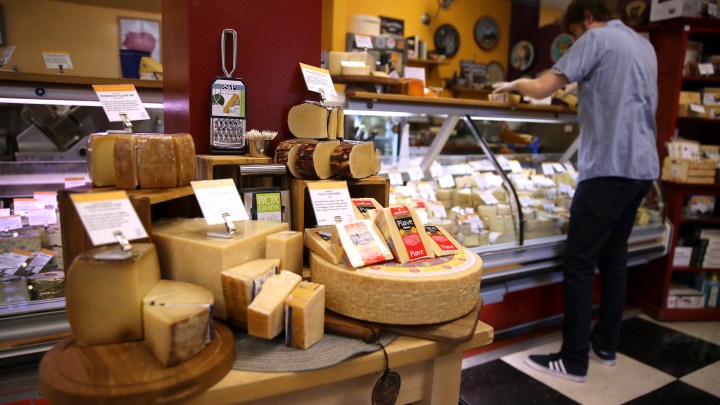 COPY
Scotch, French wines and Italian cheese and meats are about to get more expensive. Above, imported Parmesan cheese at Cheese Plus in San Francisco. Justin Sullivan/Getty Images

Scotch, French wines and Italian cheese and meats are about to get more expensive. Above, imported Parmesan cheese at Cheese Plus in San Francisco. Justin Sullivan/Getty Images
Listen Now

Sal DiPalo’s been wrapping up cheese and meat for 50 years at DiPalo’s Fine Foods in Manhattan’s Little Italy. DiPalo’s great-grandfather opened his first store in 1910. Now he and his siblings run the business, importing all kinds of stuff from Italy.

“We got cheeses hanging, provolone from Naples,” DiPalo said. “Our windows are garnished with prosciutto de parma.”

And all of those items are about to get more expensive. The United States is going to impose 25% tariffs on Friday on Scotch, French wines and, yes, Italian cheeses and meats. The U.S. won a suit at the World Trade Organization accusing the European Union of illegally subsidizing Airbus, and these tariffs are basically a form of damages permitted by the WTO.

DiPalo is hoping that everyone along the supply chain can eat some of the increased cost, but he says there’s no way around it: Prices are going to go up for his customers, and he’s worried how they’re going to react. Already, prosciutto costs $29 a pound.

“The cheeses and meats we sell now are high,” DiPalo said. “People are going to think twice.”

The thing that really bugs DiPalo, though, is that he, a guy who sells cheese and meat and olive oil, is having to pay the price for a trade dispute over airplanes.

“I think it’s unfair to everyone because it didn’t relate to food,” he said. “You want to stir the pot? Stir the pot where it belongs.”

But the fact that these airplane-related tariffs are hitting European cheeses and wine is not an accident.

“You’re trying to hit the most politically motivated groups so you can get interest groups in other states to lobby their own governments to repeal the policy you don’t like,” said Duke University law professor Rachel Brewster. “It’s almost a collective punishment.”

The U.S. may be betting on French wine producers and Italian cheese makers to object vigorously enough that the EU stops subsidizing its airplanes. The U.S. could have focused all its tariffs on airplanes, but this spreads the pain across as much of Europe as possible. And European airplanes and airplane parts are important to the U.S. economy in ways that European wine and cheese just aren’t.

“Normally what is hit is considered nonessential items,” Brewster said. “It’s unlikely that you’re going to hit pharmaceuticals, for instance. You wouldn’t want to raise the price of necessary drugs, but you tend to hit what people think of as luxury items.”

American importers of those luxury products are they’re caught in the middle. And soon, more American companies are going to get caught, too, because Europe won its own WTO case about airplanes. It turns out that while Europe subsidized Airbus, the U.S. subsidized Boeing.

“Within the next few months, there’s going to be a similar ruling that lets the E.U. retaliate against the U.S. in some amount,” said Simon Lester, associate director of the Center for Trade Policy Studies at the Cato Institute.

The retaliation is almost certain to come in the form of tariffs, and they will be designed to hurt.

“The ideal is these tariffs are designed to force you to sit down and negotiate and change the government action that’s at issue,” Lester said.

That is, as he said, the ideal. But the U.S. hasn’t always operated within the rules of the WTO under President Donald Trump. So it’s not clear if, when those EU tariffs come, the U.S. will negotiate or retaliate with other tariffs, like on automobiles. Which could add a whole other group of people caught in the middle of a fight about airplanes.