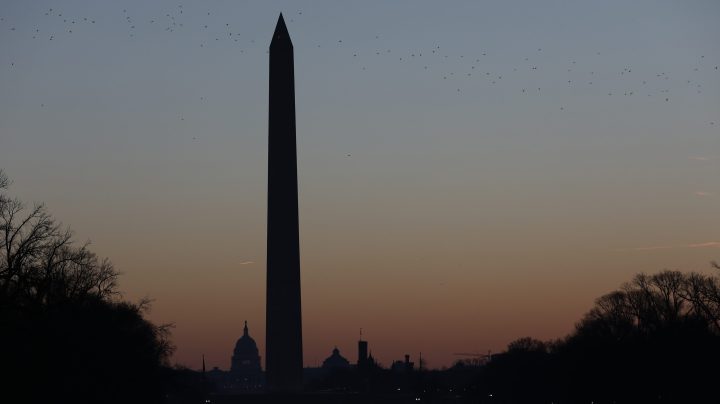 The monuments on the National Mall in Washington D.C. memorialize the country’s wars and great leaders, and one might assume that the federal government pays for all of them. But they’re actually funded in large part by private citizens.

Take the Washington Monument, which recently reopened after three years of renovations. The view from the top of this 555-foot tall obelisk is incredible.

“You are looking directly down the line at the Capitol, the White House, the Lincoln Memorial and the Jefferson Memorial,” said National Park Service spokesman Mike Litterst from the observation deck. “I mean, you could not have laid this out any better.”

Litterst was part of a special tour of the monument for billionaire philanthropist David Rubenstein, who donated $3 million to repair its elevator. About half a million visitors use it every year to take in sweeping views of the nation’s capital.

“I get a lot of pleasure out of doing these things,” Rubenstein said. “And if I didn’t do them and I died with more money, would I be a happier person? I don’t think so.”

Rubenstein made his fortune as the co-founder of the Carlyle Group, a private equity investment company. He’s made multi-million dollar donations to D.C. institution ranging from the National Zoo to the National Gallery of Art to the Lincoln Memorial. The Zoo’s panda exhibit even bears his name. But he doesn’t have a donor’s plaque at the Washington Monument, where he also contributed money in the past for repairs after an earthquake damaged the structure in 2011.

He calls his charitable giving “patriotic philanthropy,” but said its been difficult selling the idea to other big donors.

“I’ve been surprised at how hard a time I’ve had in convincing other philanthropists to give to these kinds of projects as opposed to education and medical research,” he said, adding that they tell him it’s the government’s job to fund the monuments, not theirs.

That view is, in part, accurate: The National Park Service paid more than $7 million out of its annual budget for the rest of the Washington Monument’s renovations; to replace a temporary security facility built after the 9/11 terrorist attacks with a new one.

However, most memorials on the National Mall were built with private dollars.

“People don’t realize that,” said Catherine Townsend, the president and CEO of the Trust for the National Mall, which raises money to support the Mall’s landmarks. “They think, they’re here, it’s free, it’s open, and they think the government has paid for everything.”

Typically Congress authorizes a memorial, and then private citizens raise the funds to build it. Private donors funded the $16.5 million Korean War Veterans Memorial and the $8.4 million Vietnam Veterans Memorial. They also contributed about 90% of the $120 million needed to build the Martin Luther King, Jr. Memorial.

Once a memorial is erected, the Park Service steps in to maintain it. But even that can be a struggle. The Park Service has an almost $12 billion maintenance backlog right now.

“We’re really working hard to figure out maintenance funds for each of the monuments, because they do need help,” Townsend said.

The Washington Monument is a prime example. A charity organization, the Washington National Monument Society, started building it in 1848 with funds it collected from private donors, civic groups, states and even foreign countries. In exchange, those people and groups got to design intricate plaques to be placed in the monument’s 896-step stairwell.

But the money ran out after 5 years, when the monument was only a third of the way done. It stayed that way for 2 decades, until the federal government stepped in and paid for the rest and the U.S. Army Corps of Engineers took over construction. All in all, taxpayers paid $957,710, and private donors paid $230,000.

“It’s an early public-private partnership,” Litterst said. And there are more in the works. The National Mall’s newest monument, to President Dwight D. Eisenhower, opens next year. Both the government and private donors chipped in to cover the $145 million cost.