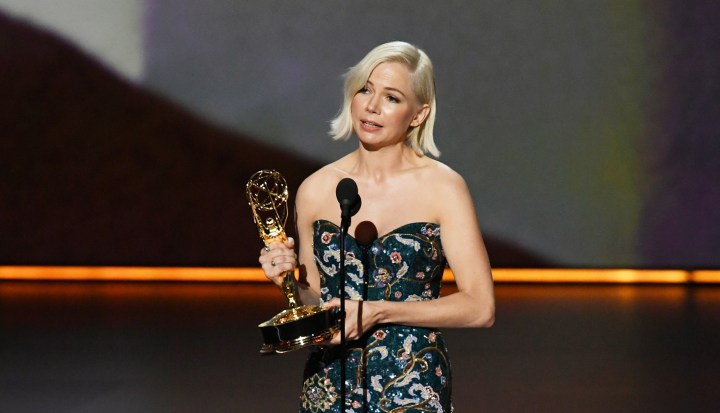 At Sunday night’s Emmy awards, Michelle Williams took the stage to accept her award and raise awareness about the pay gap between men and women.

Williams, who won outstanding lead actress in a limited series or movie for her role in the miniseries “Fosse/Verdon,” thanked FX and Fox 21 studios for supporting her and paying her equally.

“They understood that when you put value into a person, it empowers that person to get in touch with their own inherent value. And then where do they put that value? They put it into their work,” Williams said. “And so the next time a woman — and especially a woman of color, because she stands to make 52 cents on the dollar compared to her white male counterpart — tells you what she needs in order to do her job, listen to her. Believe her. Because one day, she might stand in front of you and say thank you for allowing her to succeed because of her workplace environment and not in spite of it.”

Williams hasn’t always encountered equal treatment in her career, notably earning much less than her co-star Mark Wahlberg for reshoots of their 2017 film “All the Money in the World.”

Wahlberg was paid $1.5 million, while Michelle Williams was paid less than $1,000 — or one-tenth of 1% of what he made, according to USA Today.

Sure, A-list actresses may end up making millions of dollars for a film, but Williams pointed out backstage that the pay gap on the film “illustrated not just a larger point for me, a woman of privilege, but how difficult it is for women of all [backgrounds].”

“When you look at all numbers, 52% on the dollar is what a Hispanic woman will make compared to a white male,” she told the press.

Research has indeed shown that some women of color end up making about half of what a white man makes. A 2018 report from the Georgetown University Center on Education and the Workforce falls in line with what Williams said, showing that Hispanic or Latina women make 52 cents for every dollar that white men make.

Here’s how that number breaks down for other groups:

These amounts can vary, of course, according to variables like educational attainment.

The educational group with the widest gender wage gap happens to be those with bachelor’s degrees, according to the Georgetown report. Here’s how that breaks down:

Meanwhile, wage earners with the least amount of education have the smallest pay gap.

“The lack of education affects everyone about equally, resulting in poverty,” according to the report.