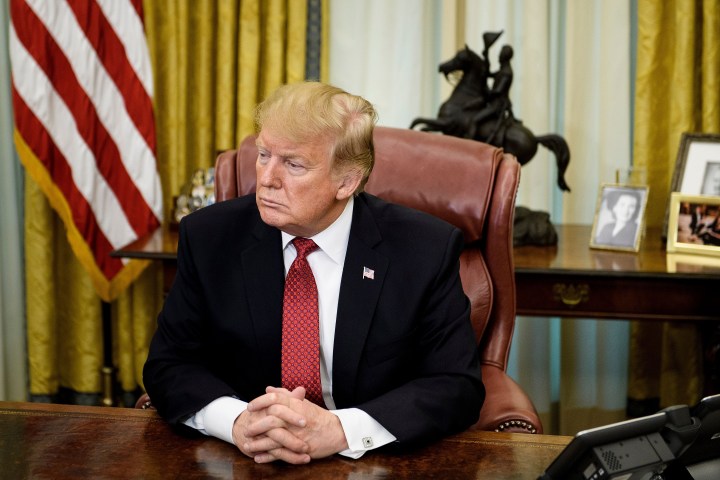 Donald Trump has tested the limits of the law during his presidency, using economic pressure to carry out his political aims.

In August, Trump ordered U.S. companies to stop doing business with China and cited the International Emergency Economic Powers Act as the basis for his authority. Lawyers and analysts found his decision to invoke the law unprecedented.

“We have never seen any president use it as leverage in a trade dispute with another country,” Judith A. Lee, co-chair of the International Trade Practice Group at the law firm Gibson Dunn, told Marketplace.

New York University’s Brennan Center for Justice has identified 123 statutory powers the president can use if he declares a national emergency, with IEEPA being the most widely used.

“IEEPA alone gives the president a massive amount of control over the economy,” said Elizabeth Goitein, co-director of the Liberty & National Security Program at the Brennan Center. “If you add them up, and if you assume generous interpretations and aggressive creativity like we’ve seen from this administration in the past, that could give the president some pretty substantial economic powers.”

While Goitein said executive branch lawyers have been familiar with the various laws for a long time, she noted, “I think educating the public — and frankly even lawmakers, a little bit — about what powers are available levels the playing field.”

Along with these emergency powers, various trade acts throughout history also give Trump the ability to control tariffs on goods imported from other countries. Here are some of the laws that Trump can use to carry out his economic agenda.

If Trump declares there’s a national emergency, he can invoke 49 U.S. Code § 114, a statute that allows the head of the Transportation Security Administration (under the direction of the secretary of Homeland Security) to “coordinate domestic transportation,” which includes surface transportation, like airline and railroad travel, along with maritime transportation.

“It could be potentially used to get rid of emission standards for vehicles or subsidize transportation [in] a favored industry,” Goitein said. “Altering emissions standards would have the net effect of ‘coordinating’ transportation in a certain way, but it would be an extremely indirect way to do it.”

Goitein noted that even though this would be a very “creative” interpretation of the statute, these are still possibilities you have to consider. For her, a more typical interpretation of this language might be, hypothetically, if there were a terrorist threat made to Amtrak, and the administration had to shut down transportation or reroute traffic away from areas that were threatened.

The Trump administration has already attempted to roll back emissions standards, announcing a plan in August to revoke an Obama-era environmental regulation that mandates automakers try to make cars substantially more fuel efficient.

When it comes to agricultural products, the president has the ability to impose fees and limit imports when there’s a national emergency under 7 U.S. Code §  624 without having to wait for recommendations from the International Trade Commission.

“He can use that as a kind of protective tariff,” Goitein said.

Another untapped power the president has comes from Section 338 of the Tariff Act of 1930, according to a paper from the law firm Covington & Burling, co-authored by John Veroneau and Catherine Gibson.

Veroneau, a partner at the firm, said that Section 338 gives the president broad authority to impose or raise tariffs if U.S. companies or interests are being discriminated against. In such cases, the president can impose additional duties of up to 50% of the product’s value and also block imports from that country if it continues to discriminate against U.S. goods.

Even though presidents have the ability to wield this statute, it’s gone unused for decades. The last public record that Veroneau and Gibson found related to the statute dates back to 1949, when the U.S. secretary of state sent a telegram to Shanghai’s consul mentioning 338 “as a possible response to discrimination by China against American trade.”

Veroneau said that if Section 301 is used to address unfair trade practices, then that very rationale meets the criteria of Section 338. However, he added that unlike Section 301, Section 338 does not require the Office of the United States Trade Representative to perform a formal investigation.

While Trump can use this power, Veroneau and Gibson noted in their paper that their “raising awareness of this tariff authority is not a call for its use,” and that World Trade Organization members would “certainly” try to challenge it.

The president also has the ability to “create, maintain, protect, expand or restore domestic industrial base capabilities essential for the national defense” under 50 U.S. Code § 4533.

Trump can use this statute whether or not he declares a national emergency. However, the declaration of one would enable him to waive some of the restrictions on this authority.

“Essentially, he can choose to put government money behind any industry or industries that fall into broad parameters, such as industrial resources, technology, materials and production capabilities,” Goitein said.

The president can “authorize an agency to guarantee loans by private institutions in order to finance products and services essential to the national defense” using 50 U.S. Code § 4531 in the event of a national emergency.

“You could see that as being a way to ensure, basically, the subsidizing of a range of industries that otherwise might have trouble,” Goitein said. “Subsidizing things like coal, for example.”

Coal, of course, is a struggling industry that Trump wants to revive. In the past, he’s said his team was preparing to lift restrictions on American energy and put coal miners back to work.