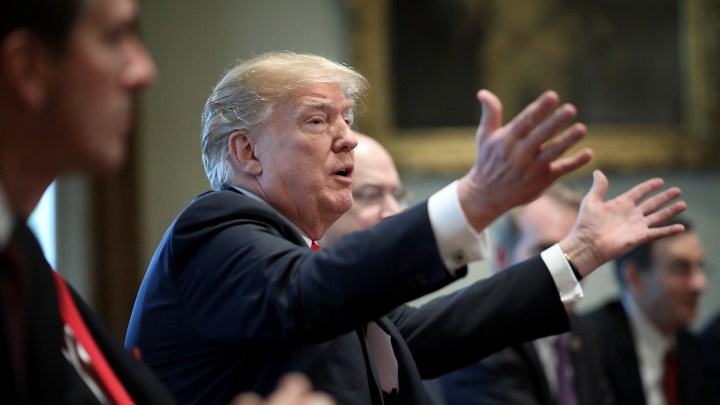 COPY
President Donald Trump speaks during a meeting with leaders of the steel industry at the White House in 2018 in Washington, DC., where he announced some of the first tariffs in what would become the trade war with China. Photo by Win McNamee/Getty Images
Trade showdown

President Donald Trump speaks during a meeting with leaders of the steel industry at the White House in 2018 in Washington, DC., where he announced some of the first tariffs in what would become the trade war with China. Photo by Win McNamee/Getty Images
Listen Now

The Trump administration is delaying some of the import taxes that the president threatened a few weeks ago.

Items the tariffs of which will be delayed until Dec. 15 include: Christmas tree ornaments, Christmas tree lights, cellphones, cameras and video games.

Tariffs will go into effect as planned on Sept. 1 on items like: vanadium chloride, glycerol and mules.

It’s not a coincidence that one of those lists sounds more Christmassy than the other.

“Santa and his elves vote in purple states and [the Trump administration doesn’t] want to lose those votes, so they’ve backed away from this threat,” said Richard Weiner, a partner at the law firm Sidley Austin.

The president has often said that China pays the tariffs he imposes. But he told reporters that he postponed the latest tariffs in case they had an impact on holiday shoppers.

“Their claims that China pays these tariffs is simply not true,” said Weiner.

“I think they were delayed because the president started seeing the markets tank,” she said.

The S&P 500 fell almost 3% in the days after Trump’s announcement of the new tariffs at the beginning of August.

The back and forth on tariffs is making it difficult for businesses to plan, she said. “It creates a period of uncertainty and puts them in paralysis.”

For companies that import Chinese goods on which tariffs have not been postponed, it’s “a world of hurt,” according to Stephen Lang, owner of Mon Cheri Bridals and president of the American Bridal and Prom Industry Association. Lang’s company makes wedding gowns, prom dresses and quinceañera dresses, among other things, in China.

“What [President Trump has] just done is raise my duty bill by 40%, which is enormous. I paid $5 million in duties last year,” he said.

While Lang says he sympathizes with the desire to counter China’s lax approach to protecting intellectual property, he says the manufacturing jobs the president may be trying to save are not coming back to the U.S.

“Do you know anyone who went to college to sit behind a sewing machine? I don’t,” Lang said.