There are public advocates sprinkled throughout the federal government. On the Social Security and Medicare trustee board. At the Pension Benefit Guaranty Corporation. Their job is oversight. They do internal investigations, and hold official Washington accountable for how rules and regulations affect individual Americans. One of these positions will soon be open for the first time in almost 20 years. National Taxpayer Advocate Nina Olson is stepping down on July 31.

I went to the IRS recently to interview Olson. You know as soon as you step in the building that secrets are kept here — data on millions of taxpayers. I’m escorted every step of the way to a conference room in Olson’s third-floor suite of offices, just down the hall from the IRS commissioner. I look around, expecting to see typical tax stuff — maybe stacks of tax law books. Instead the conference room table is half covered in small, colorful plastic dinosaurs. Olson walks in and explains that she just really likes dinosaurs. 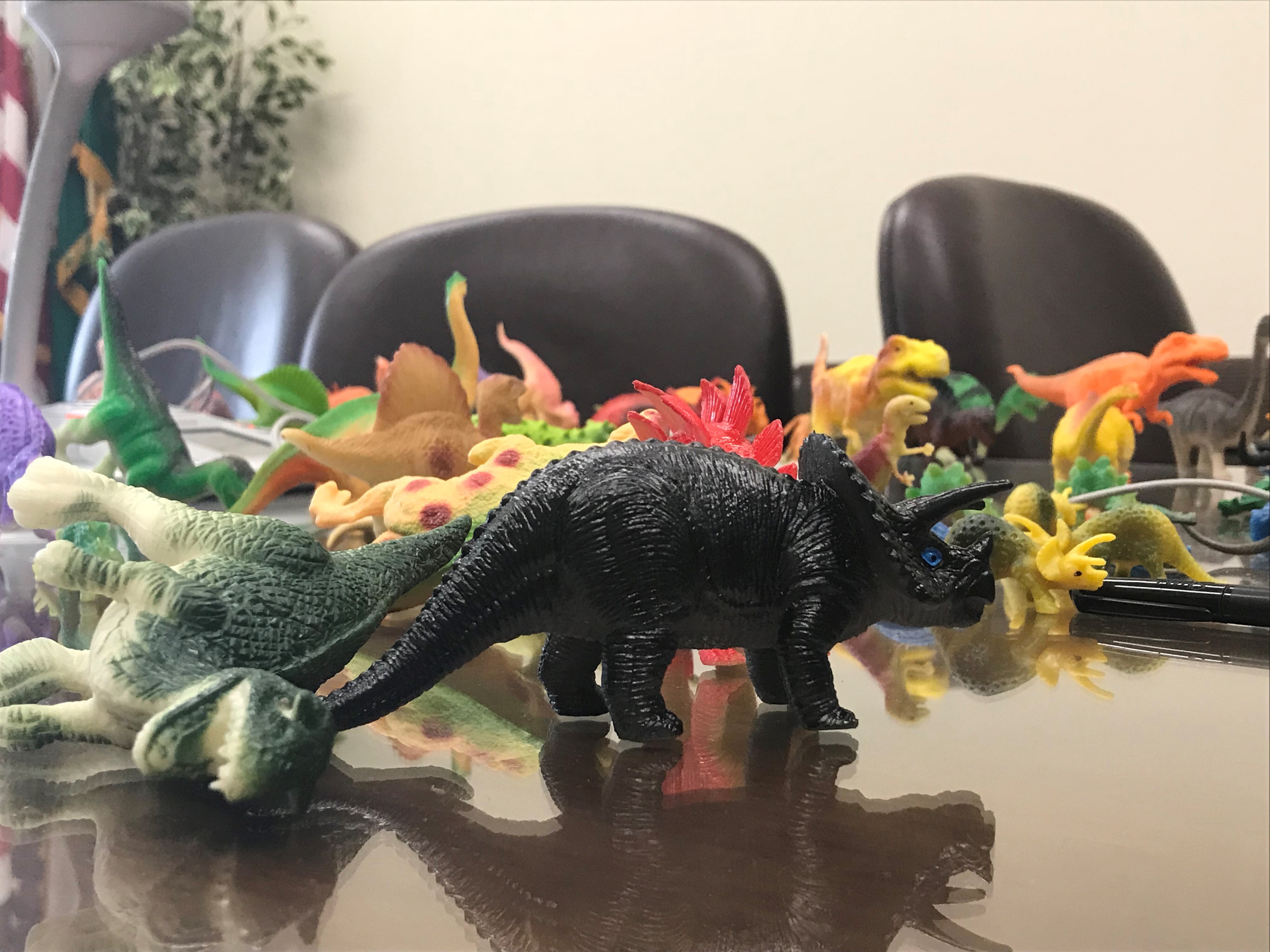 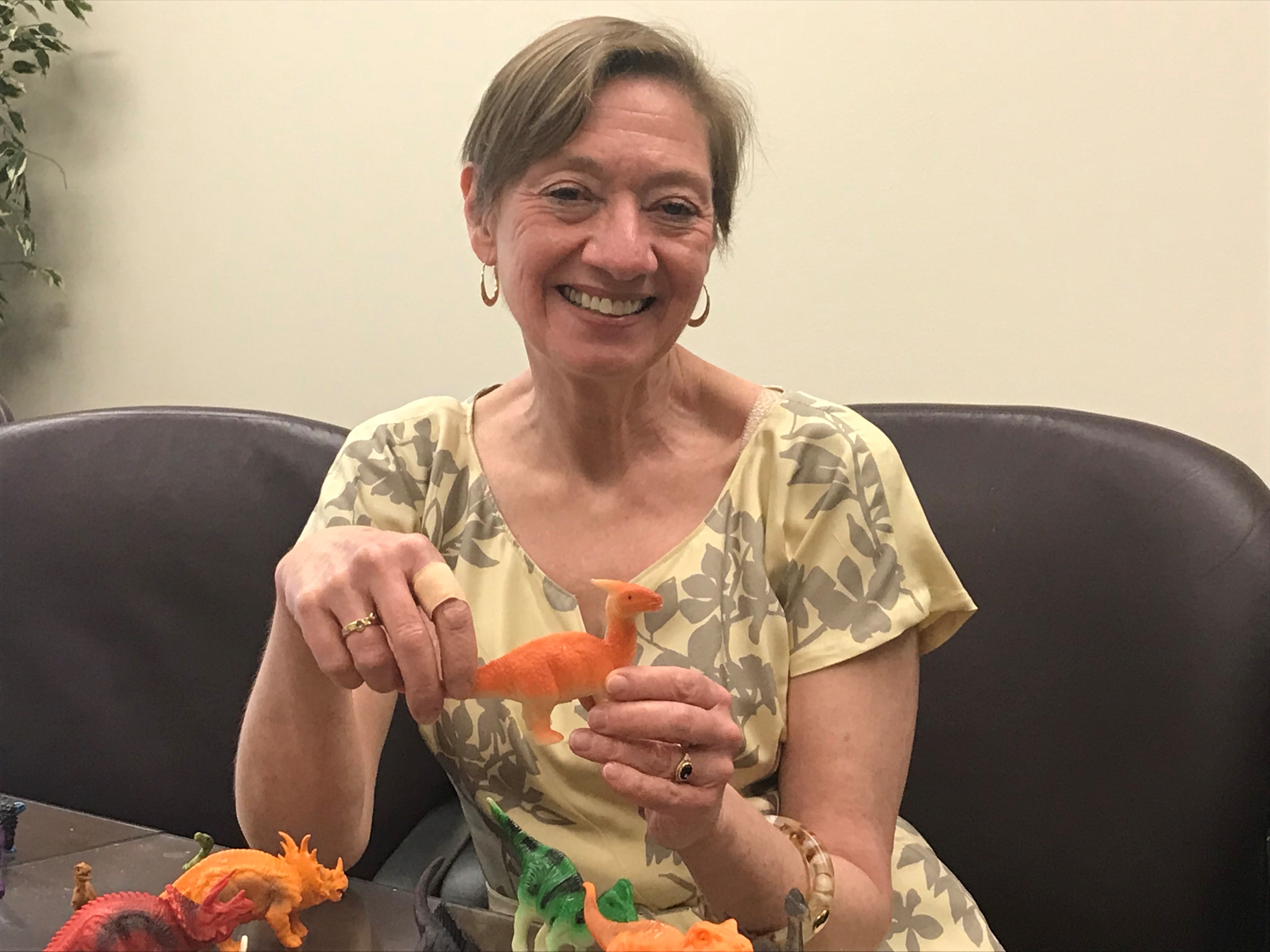 National Taxpayer Advocate Nina Olson posing with one of her plastic dinosaurs.

We’re heading toward Olson’s office when she stops in front of a framed poster of the New Orleans skyline. It’s a gift from the manager of a New Orleans Marriott to thank Olson for being an advocate for the city. She held a conference there a year after Hurricane Katrina, in spite of protests from some of her employees. Olson says they were nervous about safety, but when they got to New Orleans she says, ““They were approached by people, like in the hotel saying this is the first week I’ve been able to work 40 hours. Thank you so much for being here.”

When we do get to Olson’s office, I can barely get close enough to her desk to see if there’s a dinosaur on it. There is of course, but you’ll have to take my word for it. She wouldn’t let me take a picture. This is the IRS, after all, and she could have somebody’s 1040 lying on her desk.

“We just can’t have anybody seeing anything,” Olson tells me. “It’s vital that we protect the confidentiality of taxpayers’ tax information.”

In her 18 years on the job, Olson has scolded and cajoled, trying to get the IRS and Congress to share more of her concerns about taxpayers. She submits two annual reports to Congress, peppered with phrases like, “taxpayer service is woefully inadequate.” In what she considers one of her finest moments, she pushed the IRS into adopting the Taxpayer Bill of Rights. You’d think after all that, taxpayers would be grateful for their advocate. But they don’t even know who she is.

Before the interview, I asked pedestrians across the street from the IRS if they knew they have a taxpayer advocate named Nina Olson. None did.

One of them, Nicole Meeuwse-Tienou from Chicago, was apologetic. “I’m so sorry, Nina – we’re sorry,” she said. “And now we know about you and we will spread the word.”

I played that interview for Olson. She really liked that last part about spreading the word. “Yay, that they would tell other people — I’m not depressed,” she told me.

Olson also likes people to know she exists. She went on a nationwide listening tour in 2016. She talks taxes with cab and Uber drivers. In return, she often gets an earful on the IRS.

I cue up another soundbite from my street survey. This time with Marsha Jackson, who’s from the Washington, D.C., area. “It seems as though the rich continue to get the breaks and the middle class are just eaten up with all the burden of most of the taxes,” Jackson says.

This hits a nerve with Olson because fairness is a huge issue for her. About five years ago, she led an investigation that exposed a big problem.  Forty percent of the delinquent taxpayers the IRS was handing over to private debt collectors didn’t have enough money to pay for basic necessities. The IRS isn’t supposed to collect from them. Olson remembers getting “the look” at meetings when she brought up the issue.

“And so I’ll say I have a concern or I have a question and everybody’s staring darts at me, and you just have to plow ahead,” she explains.

There are people who know exactly how Olson feels – other public advocates. Sometimes Olson hangs out after work with the advocate for the Pension Benefit Guaranty Corporation, who’s also gotten the hairy eyeball.

“So it’s nice to talk to one another and go, ‘Yeah, I’ve been through that,'” Olson says.

Olson’s  successor hasn’t been appointed yet, but she’s not going away entirely. Olson is establishing a nonprofit to continue advocating for taxpayers. But she has some other important matters to take care of first, involving weaving on her loom.

“Well, first of all I’m going to search for some land so I can have some goats and sheep,” she tells me.

So she’ll have plenty of wool to turn into thread on her new spinning wheel. When she’s not weaving or advocating, Olson plans to head to the Natural History Museum across from the IRS to see the new dinosaur exhibit.