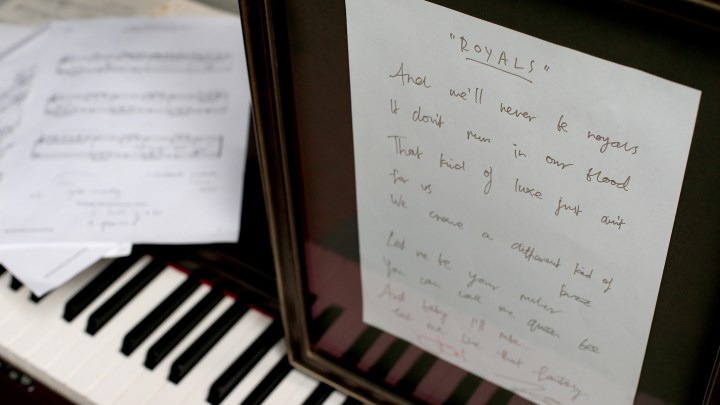 Three-year-old Aliyah Vaughan (full disclosure: she’s my niece) loves to ask her parents’ voice-activated speaker to play songs. She doesn’t always get the exact name of the song, but a lot of times she knows a few words.

“Alexa: ‘Baby you’re a firework,’” she shouts from the kitchen.

Being able to tap a big database of song lyrics helps the Echo figure out what users like Aliyah are asking for.

Once upon a time, lyrics were extras. If you were lucky, they were stuffed inside the sleeve of an LP.

“For a long time it [song lyrics] was Google’s No. 1 search term, on top of anything else,” said Darryl Ballantyne, CEO and founder of LyricFind.

Understanding how Ballantyne’s company works helps explain a lot about the business.

“We started it briefly as a consumer-facing site just to make some advertising revenue,” he said.

But Ballantyne and his partners soon figured out the company had an intellectual property problem. Music publishers hadn’t sued, but Ballantyne figured that was coming.

“We had launched it in 2000. And before the end of the year we had taken everything down to try to get licensing,” he said.

It took them some time to make deals with song publishers. And the new LyricFind relaunched four years later with a very different business model: The company would buy the rights to display lyrics then resell them to other companies.

“The economies of scale were not there unless you were providing that data and licensing to everybody,” he said.

Today, LyricFind resells rights to many companies, including Amazon, Pandora, MetroLyrics and Google. If you’ve ever searched Google for lyrics and they’ve popped up so you don’t have to visit another site to get them, chances are they come from LyricFind.

But the intellectual property questions LyricFind wanted to avoid are still around.

One of the big lyrics websites, Genius, recently accused Google of ripping off some of its content.

“Genius is saying, ‘Google is taking the lyrics from our website, they’re just ripping us off,” said Janko Roettgers, technology writer at Variety. “But then Google on the other hand is saying, ‘We’re not actually doing this, we’re getting it from these third-party companies, from these lyrics aggregators.'”

In other words, from LyricFind.

That company didn’t want to talk about the controversy. Nor did Google. Nor did Genius.

Ben Gross, chief strategy officer at Genius, is quick to admit the business of song lyrics is still pretty messy in some other ways.

“When you license lyrics from the music publishers, they don’t actually provide you with official lyrics or anything,” Gross said. “So anyone who has a lyrics display license has to figure out what the lyrics are.”

Genius sources a lot of its lyrics from what it calls “superfans,” those people who are more than glad to set the world straight on, say, what Elton John is singing in the chorus to this song:

Over the years, musicians have accused lyric websites of stealing. But that tension’s quieted down as the industry has figured out that artists need to get paid.

Songwriter Adrian Quesada, who fronts Grupo Fantasma, a Latin funk band in Austin, Texas, is happy to see some of his lyrics online. He says it helps pay the bills.

“One huge piece of the pie that I always push for and try to make sure is covered is the licensing part of it because that could be a significant amount of income,” he said.

Quesada calls that “mailbox money” because when those checks arrive, he doesn’t exactly know if that money is from someone displaying his lyrics or from a company using a melody he wrote to sell something.

Either way, he’s thankful for the extra cash.