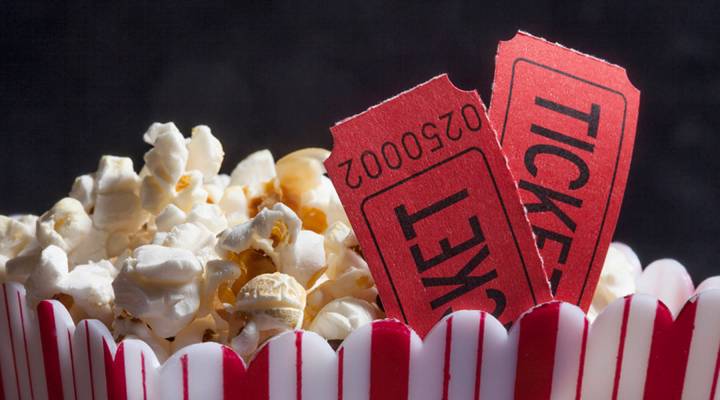 It’s Friday, and date night has finally arrived. At the theater, you get settled into your seat, waiting for the movie to begin. Mid-popcorn munch, your date turns to you and asks how much he owes you for tickets and snacks.

At a time when we have more movie screens than ever before, we ask the question: How did we get here?

Breaking down the cost

“Last year, we had a record year at the box office, with $11.85 billion in revenue and about 1.3 billion tickets sold,” Patrick Corcoran, vice president of the National Association of Theatre Owners, said.

2018 was also a record-breaking year for movie ticket prices, which averaged $9.11 in the United States.

But are ticket prices as high as they seem?

“It is in nominal terms, but in terms of the actual cost of it adjusted for inflation, it’s actually less expensive to go to movies now than it was 40 years ago,” Corcoran said. A movie ticket in 1978 was $2.34. However, that ticket would cost $9.41 in 2018 dollars, according to NATO.

While the final cost of tickets are determined by movie theaters, pricing can vary depending on multiple factors, said Jonathan Kuntz, UCLA professor of American fIlm history, including the city the theater is located in and what run the film is in.

The NATO average ticket price includes theaters from markets around the country, from the relatively inexpensive theaters in rural communities to major metropolitan theaters in areas such as Los Angeles and New York.

Corcoran, vice president of NATO, said about 52-56 percent of ticket sales go back to the studios, leaving the theater with the remainder.

The longer the movie stays in the theater however, the more money theaters get to keep. But in today’s movie landscape, according to Kuntz, a movie makes the most money during the first week of release. By the time it’s reached its third or fourth week, it has essentially “reached the end of its theatrical run.”

Movie tickets however, don’t generate enough revenue for movie theaters to function off alone. That’s where concessions and advertising come into the picture.

Theaters, Kuntz said, are happy to break even on ticket sales if it allows them to “sell the marked up or overpriced popcorn, soda and hot dog.”

Let’s all go to the movies

Technology is driving a growing number of competitive content platforms like Netflix, making it hard for movie theaters to fill seats. Technology, Kuntz said, has led to a “quixotic battle to keeping the theatrical movie experience alive.”

Over the years, according to Kuntz, movie theaters have used incentives to bring audiences in. Refreshments are one example.

In the 1970s, theaters introduced the Sensurround, which used low frequency sounds to rumble the theater. The feature was most notably used during showings of 1974’s “Earthquake,” a disaster film set in Los Angeles.

Large reclining seats with built-in cup holders, gourmet food options and even bars are appearing at theaters, all in hopes of bringing in bigger audiences.

“There’s all that anticipation and buildup, and all it’s really important for theater owners and companies to make that experience as pleasurable as possible,” Corcoran said.

“Because you’re offering a premium experience — audience expectations are for the latest and greatest technology,” Corcoran said. “Audiences are willing to pay more for a particular experience.”

Premium seating can be part of that experience. Theater company IPIC offers chaise lounges sold in pairs, where moviegoers can “lie down and relax in full recline position with a front row seat to the big screen,” the website boasts.

And the price for comfort in one of these lounges? In Los Angeles, $40 for two seats, plus $24 in VIP fees. In Westchester, New York and Fort Lee, New Jersey, chaise lounges cost $30.

Other theaters have taken a different approach to selling tickets.

The Blanchester Theater in Blanchester, Ohio, sells $5 movie tickets — it even offers free popcorn if you sign up for its newsletter.

Harkins Theatres, a Scottsdale, Arizona-based privately owned movie chain, sells 2D and 3D movie tickets for $6 each. Up until last year, tickets at the Tucson Harkins theaters were $5 each.

Tuesdays are known for deals like Travel Tuesday and Taco Tuesday. But movie theaters have also capitalized on the second day of the workweek by discounting movie tickets, and it’s a tradition with roots in the Great Depression.

“It was the first real crisis movie theaters faced,” Kuntz said. “Attendance dropped as much as 40 percent.”

In order to lure guests back, theaters tested out a number of solutions, including a weekly dish giveaway and price cuts on their weakest nights — like Tuesday.

During the 2008 financial crisis, discount Tuesdays were once again utilized by movie theaters in order to attract customers. Today, outside of the weekend, Tuesdays are the most attended day of the week, according to Corcoran.

To infinity … and beyond?

As the movie theater industry changes, film historians like Kuntz are asking themselves, “what’s next?”

“We’re in an existential battle — whether theaters are going to survive. Whether the theatrical experience is something special enough that’s going to be passed on from generation to generation,” Kuntz said.