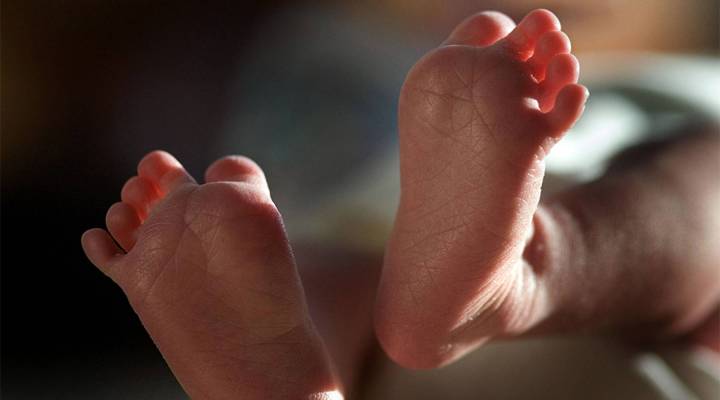 As part of a series on birthright citizenship, Marketplace’s China correspondent Jennifer Pak explores why Chinese parents come to America to give birth. You can read an overview of the journey parents take, and learn more about the agencies that help families arrange the whole trip to the U.S, and the medical care they receive on arrival.

Nobody knows exactly how many Chinese mothers travel to the United States every year to give birth here in order to give their children U.S. citizenship. The federal government doesn’t keep count. Experts who study the phenomenon suggest that the number is in the thousands. Anti-immigration group the Center for Immigration Studies estimates that every year, between 30,000 and 40,000 babies are born in the U.S. to foreign women, mostly from China and Russia.

Agencies in China say the number’s much higher — that more than 50,000 Chinese nationals deliver babies in the United States every year.

Marketplace spoke to two parents who made the trek.

Harper Hsuan and her son, bottom left, observe a horse riding lesson in China. She spent more than $44,000 to give birth to her baby in Los Angeles last year. Few of her colleagues know, so she prefers to not reveal their faces.

Knowledge of the U.S. prior to the trip: Only from American music and Hollywood movies. Her favorite films are “Forrest Gump” and “The Shawshank Redemption.”

Why give birth in the U.S.?

Hsuan has a 9-year-old daughter who has grown up through a string of food and safety scandals, including tainted baby formula and expired vaccines.

When she became pregnant for the second time in 2017, she wanted to give her new baby a shot at a better environment. To her, that means cleaner air, safer food and a society with more emphasis on spirituality and less on personal connections.

No. Hsuan also considered giving birth in Japan, Australia and Canada. In the end, she chose the U.S.

“It is an open and free country, and its higher education is the best in the world,” Hsuan said.

Was it difficult to figure out how to give birth in the U.S.?

No. Hsuan typed in the phrases “going to the U.S.” and “giving birth to babies” into China’s Baidu search engine and millions of results popped up.

Many agencies offer to arrange every aspect of a mother’s trip. Eventually she settled on an agency in Shanghai called Meijiabei, or Good American Baby.

Did you state your real intention when applying for a U.S. visa?

Hsuan said she told immigration officials that her visit was for medical purposes, to give birth.

“I needed to show [immigration officials] my property certificate. They were very worried that I would stay in the U.S. Then I showed my car ownership document, employment certificate, work contacts, anything that can prove that I will not overstay my visa in the U.S.,” she said.

What was the maternity clinic in the U.S. like?

Hsuan chose to stay alone in a house in what she called a “rich” Los Angeles neighborhood.

After giving birth, Chinese women are advised to stay mostly bedridden for 30 days to recuperate. This is known as “sitting the month.”

Hsuan said the agency provided a babysitter for her newborn, while a professional Chinese caregiver cooked boiled chicken soup and other foods intended to speed her recovery.

Plans to immigrate to the U.S.?

Hsuan isn’t sure. Her husband’s business is flourishing in China.

Regardless of whether they immigrate, Hsuan said they will invest in their son’s country.

“Not everyone who went to give birth in the U.S. wants to take advantage of the welfare in the U.S.,” Hsuan said. “If this can bring benefits to your people, why turn down the opportunity?”

Screenshot of a Chinese birth-tourism agency website explaining how to choose maternity clinics in the U.S.

(Marketplace is withholding his full name because he admits to deceiving U.S. immigration officials, which can be prosecuted as visa fraud.)

Knowledge of the U.S. prior to the trip: Only from Hollywood movies and songs by country music singer Jason Aldean.

He wants the best education for his child.

Donny was admitted to a Chinese university in the early 1990s, when only one in three applicants were accepted. But when he entered the workforce in Shanghai, he felt let down by his education. He lacked the leadership and teamwork skills of his foreign colleagues, he said.

When his wife became pregnant, he looked into Shanghai’s best international schools, only to discover that they only accept students with foreign passports.

What other perks does an American passport provide in China?

Donny believes that it will improve his son’s status.

Donny owns property and his own business in Shanghai. But under China’s household registration system, known as “hukou,” he is still registered in his hometown in Jilin Province, 1,300 miles away. And if his son had been born in China, he would automatically have been registered there, as well, limiting access to public schools and other resources in Shanghai.

“Money cannot easily change the hukou. For example, if I want to get a Shanghai hukou, it is very difficult. More difficult than getting an American green card,” Donny said.

“If my wife gave birth to the baby in Shanghai, there would be problems with his education. So why shouldn’t I be braver and give the baby American or foreign citizenship?”

No. Donny also considered Hong Kong, which is a Chinese territory but issues a passport that would have allowed his child to enroll in international schools in mainland China.

However, the Hong Kong government banned pregnant mothers from mainland China from giving birth in the territory in 2013.

Donny also considered Australia, but he and his wife did not get visas.

Did you state your actual intention when applying for a U.S. visa?

“Honestly, we lied. We told them we went there as tourists,” Donny said.

He said it wasn’t clear to him whether they would be turned away at the border if they told the truth.

“When we walked through immigration [at L.A. International Airport], we were really nervous. I bought my wife a long scarf to hide her belly.”

Increasingly, birth tourism agencies advertise that giving birth in the U.S. is legal and that parents can tell immigration officials they’re traveling for medical purposes.

“Travel to the United States for medical purposes does not in and of itself make an applicant ineligible for a tourist visa,” a U.S. consulate spokesperson in Shanghai said in a statement to Marketplace.

Impression of the U.S.:

“When I walked out of Los Angeles airport, my eyes were filled with English billboards and strange faces from different nations,” he said. “I was nervous and excited, like a country boy coming to a big city for the first time.”

He also marveled at the size of cars and homes in LA, roads that were clean and free of potholes, and the quality of the fresh food.

Was it hard to be away from family for so long?

Donny said his wife complained about feeling lonely at times because he had to return to China before the birth to take care of his business. He said that he felt quite guilty for not being by her side the whole time.

“It’s the sacrifice we had to pay to have an American baby,” Donny said.

How much does it cost to give birth to an American baby?

Donny spent about 310,000 yuan ($46,000), which he considers a big expenditure. But he notes that a normal car could easily cost that much in Shanghai.

Do you plan to immigrate to the U.S.?

By the time his son turns 21 and can sponsor green card applications for Donny and his wife, they’ll be in their 60s. Donny said he would be too old to immigrate by then.

But he said he plans to invest in the U.S. for the sake of his son’s future.

“As Chinese parents, we are slaves to our child. We want to sacrifice everything for him,” Donny said.