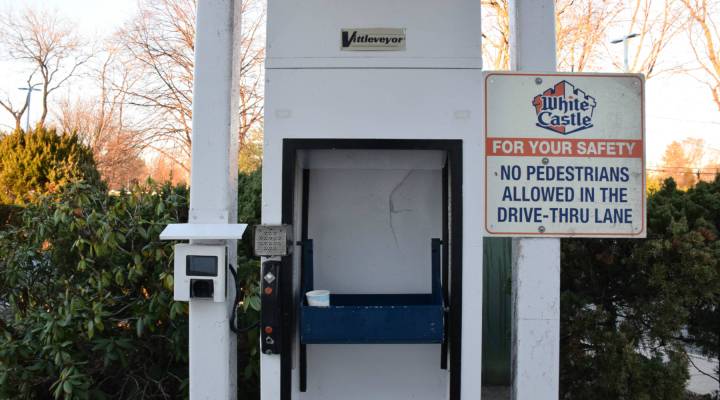 COPY
The drive-thru machine at the Commack, New York, White Castle is causing problems, but the store put renovations on hold because of the retail glitch in the tax law. Marrielle Segarra/Marketplace

The drive-thru machine at the Commack, New York, White Castle is causing problems, but the store put renovations on hold because of the retail glitch in the tax law. Marrielle Segarra/Marketplace
Listen Now

At the White Castle in Commack, New York, the drive-thru starts off pretty standard. You order at a speaker. But then you drive up, and there’s no window to pick up your food. Instead, there’s a complicated contraption that looks like a bridge that shuttles your food to your car window in a metal basket.

Meybi Fernandez, the store manager, isn’t crazy about the machine.

Customers can’t figure out how to use it so they hold up the line. And the machine breaks down a lot, especially in the winter.

“There’s been times the food gets stuck in the middle,” Fernandez said. “And we have to close down [the drive-thru] until they come and fix it.”

And that hurts her budget, because more than 60 percent of the restaurant’s sales come through its drive-thru, she said.

Meybi Fernandez, store manager, works the drive-thru at the White Castle in Commack.

Fernandez thought the machine’s days were numbered. Corporate had plans to renovate the store and put in a regular drive-thru window.

That’s on hold now because of a glitch in last year’s tax law.

“We had big plans to remodel a bunch of restaurants this year, and it really stopped us in our tracks,” said Jamie Richardson, vice president at White Castle, which is based in Columbus, Ohio.

A provision in the tax law, which Congress passed in December 2017, was supposed to allow retailers to deduct the cost of renovations from their taxes immediately.

But because of a mistake — four words dropped from the law by accident — retailers have to spread that deduction over 40 years. Before the law passed, it was 15.

Robert Branca, a Dunkin franchise owner based in Massachusetts, was planning to remodel some of his stores this year, too. That’s on hold now. He said this error has a ripple effect on the people businesses like his would be hiring: “carpenters, painters, electricians, plumbers, an untold number of contractors and subcontractors that rely on this work.”

Mistakes in big laws like this one aren’t uncommon. And Congress could pass a law to fix the error.

“In the past, technical corrections were a pretty normal part of the legislative process,” said Phill Swagel, an economic policy professor at the University of Maryland.

But the GOP would need Democratic votes to pass a fix, and it doesn’t have them.

“Our political system is very divided, and just getting any legislation passed has become very difficult,” Swagel said.

Something similar happened after Congress passed another major law: the Affordable Care Act. It had a bunch of errors, too. And because of gridlock, Congress didn’t fix those either.