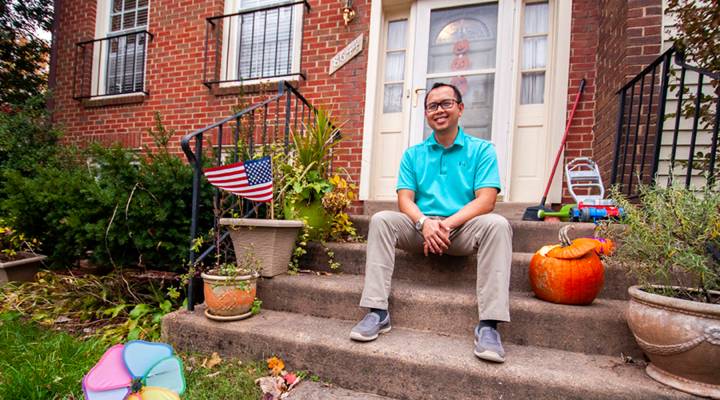 COPY
Nguyen Do, 38, in front of the house he thought would be his "starter home," in Vienna, Virginia. Chris Bentley/Marketplace

Nguyen Do, 38, in front of the house he thought would be his "starter home," in Vienna, Virginia. Chris Bentley/Marketplace
Listen Now

When Jen and Travis Boland starting shopping for their first house in Denver, Colorado, they quickly realized they’d have to downsize their wish list. Three bedrooms on the same floor? Sorry. A garage? Nope. A master suite with their own bathroom? Not going to happen.

This was almost four years ago, in 2015. Young professionals like the Bolands were flocking to Denver, and the housing market was blowing up. But Jen was pregnant, so they settled for a two-bedroom bungalow in the suburbs for $342,000, figuring they could trade up in four or five years.

“Especially as we saw the house that we could afford, it definitely became more apparent that this would be for a smaller amount of time,” said Travis, 33, a mental health counselor.

That time is almost up. Now their second baby is taking her first steps, and it’s getting crowded in the bungalow. Jen, also 33, works from home in the basement as a software trainer. Kai, the 3-year old, has his own room — for now. Their would-be master suite is an obstacle course consisting of Jen and Travis’s bed, the baby’s crib and a spacious bed on the floor for Zorro, the family dog.

“It’s a little tight when everyone is sleeping,” Jen said.

Jen and Travis Boland, both 33, with their children Olive, 10 months, Kai, 3, and dog, Zorro. They’re ready to move up from their two-bedroom house in Denver, but the market has other ideas.

Obviously, the Bolands would like a bigger house. Their house has gone up in value by more than $100,000, according to estimates from Zillow and Redfin. But so has everything else around them. They’d be looking at least $600,000 for a small upgrade.

“I feel like Denver has exploded, and now we’re kind of stuck,” Jen said.

The Bolands were following the standard housing playbook: Do anything you can to get into that first house, even if it’s not what you were hoping for. Stay put for at least five years, and then start climbing the trade-up ladder. But with home prices around the country rising faster than incomes and interest rates up sharply in the past year, many people are finding their “starter home” has become a false start.

To move, the Bolands would have to trade their 3.87 percent mortgage rate for something closer to 5 percent. That’s known as the interest rate lock-in effect. Nguyen Do, with a rate around 3.75 percent, knows all about it. When he bought a three-bedroom townhouse in Vienna, Virginia, he said, “We thought maybe five to seven years we would stay here, and then move on to something else.”

That was 11 years and two kids ago. Do, 38, would like an extra room for an office. His wife would like a bathroom where she doesn’t have to compete for the sink.

“Prices for those kind of homes are probably between $700,000 all the way to $1 million, he said. “That’s basically double the current price of our home.”

Now you may be thinking, “Cue the tiny violins. At least these families are homeowners, when so many others are priced out.” But Sam Khater, chief economist at mortgage finance company Freddie Mac, said their problems are everybody’s problem.

“You get this sort of domino effect that begins at the top with older baby boomers staying in their home longer,” he said. That makes it harder for Generation X to trade up from their starter homes, “which means that it’s harder for millennials to take that first step on the bottom of the housing ladder,” he said.

And that whole five-year rule? The average time people stay in their homes now, Khater said, is eight or nine years. This isn’t just data to him.

“I can tell you personally I’m stuck in my first home,” he said.

You know who’s not stuck? The remodeling industry. Because if you can’t buy the house you love, you make changes to try to love the one you’re in. Randy Ontiveros, 43, estimated he’s spent around $15,000 putting in new floors, bathrooms and shelves in his townhouse in Greenbelt, Maryland. He and his wife bought in 2007, just in time for the housing market to crash. Their plans to move up would have to wait until the market recovered. But then something else happened. In the past few years, they’ve helped their aging parents downsize their homes so they could move closer to their kids.

“It was difficult for them, it was difficult for us,” he said. “Making decisions about what kinds of things they wanted to keep and not.” Suddenly, the status of owning a bigger house with even more stuff wasn’t so appealing. “At one time, owning a single-family house, detached, seemed like success to us and it just didn’t anymore,” he said. “So what we thought was our starter home is actually now our home for as long as we can see it, and we’re happy with that.”