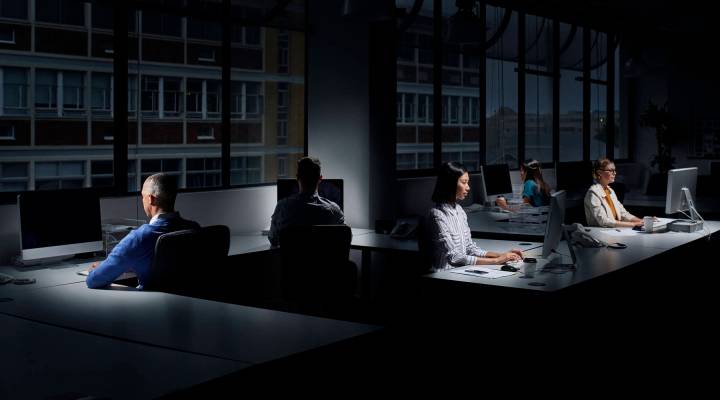 On its path to becoming the most popular personality test in the world, the Myers-Briggs Type Indicator aimed to match spies in World War II to specific tasks, evaluated high-level executives at some of America’s largest companies, and helped assess famous writers like Truman Capote.

The system measures people across four different spectrums (extroverted vs. introverted, intuitive vs. sensing, thinking vs. feeling, and judging vs. perceiving), for a total of 16 different personality types.

The indicator was started by Katharine Cook Briggs and her daughter Isabel Briggs Myers, a duo who had been inspired by the personality theories of Swiss psychoanalyst Carl Jung. Katharine, was born in 1875, had graduated top of her class from Michigan Agricultural College (now Michigan State), but didn’t carry on her studies any further.

Isabel studied political science at Swarthmore college and also graduated at the top of her class, later pursuing a career as a mystery novelist before deciding to ultimately focus on the Myers–Briggs system. Building on her mother’s initial research and interpretations of Jung’s work, Isabel began designing a prototype of the indicator in the early 1940s.

“I feel like [Isabel is] often dismissed as a housewife or a dilettante or an amateur with no training in psychology or sociology. But she was an extraordinary autodidact,” said Merve Emre, author of the book, “The Personality Brokers: The Strange History of Myers-Briggs and the Birth of Personality Testing.”

In the book, Emre delves into the background of these two inventors and explores the test’s controversial past. Here’s a look at some of the key highlights about the system’s origins.

Katharine — who had already developed her own system of categorizing people’s personalities — became fixated with Carl Jung’s “Psychological Types” in the early 1920s, even striking up a correspondence with the Swiss psychoanalyst.

“For five years, five of the most exciting and interesting years of my life, friends laughingly referred to Jung’s Types as my Bible,” Katharine recalled.

The Myers-Briggs system was inspired by his theory, which classified people along the same lines (e.g. introversion vs. extroversion), with the exception of the “judging” vs. ”perceiving” component like the indicator has now. His labels also had very different meanings.

“When Jung talks about extroversion and introversion, it has nothing to do with being social versus being a wallflower. For him, the extrovert is someone who is incredibly attuned to the demands of a social situation,” Emre told Marketplace. “The introvert is someone who has such a kind of abiding sense of their own subjectivity that they’re never going to change who they are or what they do to meet any kinds of external demands.”

Armed with Jung’s theory, Katharine devised a “personality paint box,” encouraging people to write down each type and its traits on a 3” x 5” index card, spread the cards on a flat surface, and arrange them from most descriptive to least descriptive.

She began experimenting on people she knew and had set up the “Maker’s Cosmic Laboratory,” where she would link her subjects’ dream motifs (e.g. “eczema,” “rebirth”) to Jung’s personality theory.

As World War II led to a boom in employment, employers tried to figure out how to make hiring more streamlined and determine which jobs would be best suited for someone’s personality.

“I think that was one of the motivating factors behind the development of many, many, many different kinds of personality tests. This was an industry that was constantly churning out new products in the ’40s, ’50s and ’60s,” Emre said.

More married women in particular had entered the workforce as men went off to fight the war. Isabel was someone who had  wondered how men and women could put their “different gifts toward different tasks,” Emre wrote. Days after the Japanese bombed Pearl Harbor, Isabel used her mother’s materials for a Jungian questionnaire to design a test prototype that could match people’s “gifts” to different professions.

Her first client ended up being the Office of Strategic Services, which had a group of wartime psychologists who wanted to match covert operatives to the secret missions best suited to their personalities during World War II.

They used dozens of personality tests on people, including the Myers-Briggs Type Indicator, and live-action assessments to figure out which OSS job would be best for them (e.g. paratrooper, liaison pilot, resistance leader).

But the OSS found that the test’s notion of the “true self” was only useful under certain conditions, and that “the spy’s dexterity could not be measured through pen and paper questionnaires alone,” Emre wrote.

UC Berkeley’s Institute of Personality Assessment and Research set up a “living-in assessment” in the ‘50s, inviting writers, architects and scientists to share a house for a weekend.

The institute’s director, Donald MacKinnon, would then subject them to all kinds of surveillance and testing like the Myers-Briggs Type Indicator, according to Emre.

The institute had invited writers one particular week, which included poet Howard Baker (INTJ) Pulitzer Prize-winning novelist MacKinlay Kantor (ENFP), and a 33-year-old Truman Capote, whom the staff deduced was an ENFP.

There, the staff would make Capote use a Quija board as a test of “suggestibility” and participate in group storytelling contests where participants would have to construct a character or personality.

“With very little prompting from the staff, he talked for hours about what he called his ‘emotional problems,’” Emre wrote. “The staff concluded that he had sought celebrity to escape his insecure, unloving home and that he had tended to his private wounds by making himself over as a thoroughly public presence — a ‘personality’ in the most glamorous sense.”

The Home Life Insurance Company used the test to both determine whether a job applicant would make a successful life insurance salesman, and to calculate whether a life insurance applicant should pay a larger premium on his insurance. According to Isabel, ENTPS and ENFPs were more likely to show risk-taking behavior.

General Electric also asked Isabel to type their highest-ranking executives. According to her, introverted thinkers like ISTPs or INTPs were more likely to arrive at the profoundest decisions, while ESFJs and ENFJs were more likely to convince others they were right through “free and tactful communication.”

Isabel’s conclusion: There was no perfect executive type. Each one had its different strengths.

(Many companies still use the system to help them type employees.)

Isabel formed a partnership with the the Educational Testing Service (the company that administers the SAT), which aimed to test the indicator’s validity through statistical methods.

One psychometrician visiting the ETS doubted the way Isabel appropriated Jung’s work and found some statistic irregularities in the results of the test. Samples of thousands of high school students and college freshmen didn’t show evidence of bimodality (e.g. people showing a clear preference for, say, thinking over feeling), with most people hovering in the middle. A recent graduate from New York University’s doctoral program in statistics, Lawrence Stricker, came on board and dismantled the system, arguing that the questionnaire items didn’t reflect the underlying theory.

“By the mid-1960s, the research division had moved on from [Isabel] and the indicator,” Emre wrote.

But in 1975, Isabel signed the indicator over to the Consulting Psychologists Press.

The CPP introduced a self-scoring form instead of having people send in their answers to be scored by computers or interpreted by trained psychologists. Isabel also had to shorten the questionnaire and make the type descriptions “less dogmatic.”

“Unleashed by CPP on an eager and largely untutored public, the indicator traversed thousands of primary and secondary schools, colleges, workplaces, hospitals, and churches,” Emre wrote.

But while researchers have documented flaws with the system, Isabel did genuinely want to design a valid instrument that would help people, Emre noted.

“She didn’t believe that anybody should have the answer keys. She really guarded them with her life and she believed that you had to be someone who was fully versed in speaking the language of type before you could introduce other people to it,” Emre said. “I think she would probably be appalled if she saw the ways in which the indicator was being used today. The way in which it was being sold to people who had no understanding of the theory behind it.”