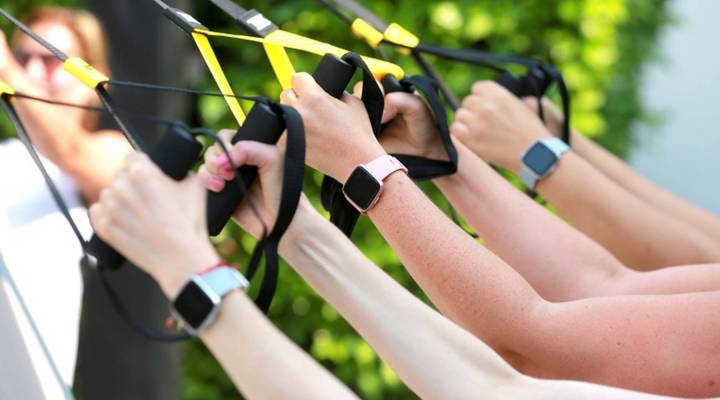 COPY
Participants who wear monitoring devices like the ones above can get cheaper premiums or rewards from John Hancock. Photo by Rich Fury/Getty Images for Fitbit

Participants who wear monitoring devices like the ones above can get cheaper premiums or rewards from John Hancock. Photo by Rich Fury/Getty Images for Fitbit
Listen Now

Life insurance company John Hancock has announced that starting next month, all new insurance policies will feature a program that offers policyholders discounted premiums if they agree to wear a tracking device that monitors their health. This type of “interactive insurance” isn’t new. Progressive has been offering similar policies for drivers. But is it the future of insurance?

Insurance is one of those things you really don’t want to use. Not even the people who sell it to you want you to use it. JB Silvers, a professor at Case Western Reserve University, said each new policy is a bet for insurers.

“And if they can change your behavior to make that last longer, then they’re ahead of the game. If you buy a policy and die next year, they lose,” he said.

John Hancock is trying to tip the scales with a program that incentivizes healthier living. Participants who wear monitoring devices can get cheaper premiums or rewards for deals on things like Apple Watches and Fitbits.

“We’re happy to reward them for that, because we know in the end, as a population of customers, they’re going to live longer, and that creates value for us that we’re sharing back with the customers,” said Brooks Tingle, John Hancock CEO.

Tingle said the tech will allow John Hancock to go from interacting with customers maybe once or twice a year to about 40 times a month. That’s a lot of chances to remind users not to pound donuts or sit in front of the TV all day.

Some privacy advocates worry that insurers could use tracking technology to penalize policyholders for bad behavior. But Tingle said his company won’t jack up premiums based on the data.

“Rewards programs in general can have a significant effect on people’s behavior,” said Yuping Liu-Thompkins, who researches marketing at Old Dominion University. She said there is a risk, though, if the company gets hacked.

“Somebody’s going to know a whole lot about my daily movements, when I go to bed, when I get up, how fast I drive,” she said. “So there’s going to be a huge amount of data that’s captured in this.”

She said privacy fears could slow how fast other insurers adopt tracking programs of their own.