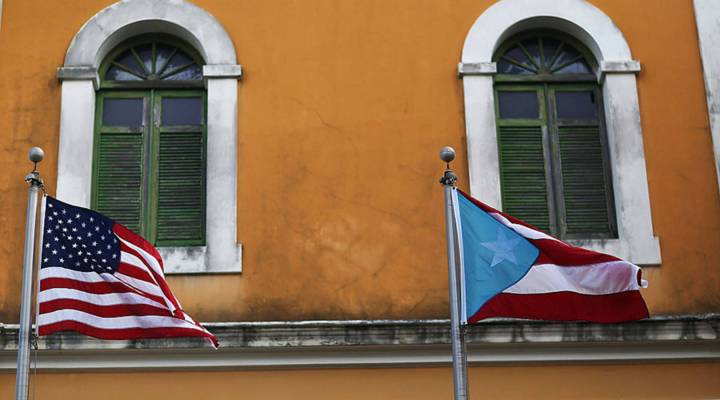 COPY
An American flag and Puerto Rican flag fly next to each other in Old San Juan in Puerto Rico. Joe Raedle/Getty Images
My Economy

An American flag and Puerto Rican flag fly next to each other in Old San Juan in Puerto Rico. Joe Raedle/Getty Images
Listen Now

My name is Maria Mercedes Grubb, and I am the executive chef of the restaurant Gallo Negro in San Juan, Puerto Rico.

The first time I walked into that restaurant after the hurricane, it was pretty hellish. Everything was covered in mold. Just a thick layer of mold on the tables and on the bar, and we took everything apart — every single bottle of spice had to be wiped down. And we had a tiny generator so that we could turn on some fans and some lights. We have no windows, so we were just sweating it out and just cleaning everything. We went without power for three months and without water for two months.

When we reopened, I was literally by myself in the kitchen. It was just my brother and I and the dishwasher. We had to shorten the menu. We had to shorten the prices. Everything had to be purchased at the local Costco. But the beautiful thing that I remember was just every guest that came through, we just to hugged them and just be so happy to see them, and everybody told you their story about what they just went through. That sense of community was just like the thing that kept you smiling, the thing that kept you wanting to just push and keep reopening every day.

Right now in Puerto Rico, you wish that your day, instead of 12 hours, you have at least an extra two hours just to cope with traffic. There’s still a lot of power lights out. You have to work harder now to be able to do what needs to be day-to-day business. But we’re turning that into a positive thing.

You know, just making ends meet and just treating them like “Iron Chef” basket sort of situation — you just opened the basket and deal with what you have in hand. We’re still going, opening every single day, keeping our doors open. We just want people to know that we’re here. We’re open for business.