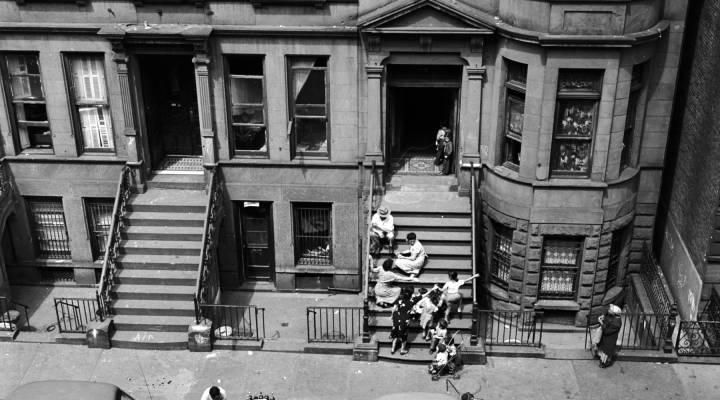 COPY
Congregating on the stoop, depicted in this photograph taken in 1955, has been part of life for immigrant communities in New York for a long time. Orlando/Getty Images

Congregating on the stoop, depicted in this photograph taken in 1955, has been part of life for immigrant communities in New York for a long time. Orlando/Getty Images
Listen Now

There have been several viral stories already this summer involving white people calling the cops on black people who aren’t doing anything wrong. “BBQ Becky” kicked it all off when she called the cops on some folks trying to have a barbeque at Lake Merritt in Oakland. Then came “Permit Patty” across the bay in San Francisco. She tried to report her neighbor, a young, black girl, for selling water. Anecdotal as these stories are, there’s actually data about this phenomenon — specifically its relationship to gentrification. Lam Thuy Vo, a data journalist with BuzzFeed News, dug through tons of Census and New York City data looking for correlation between three data points: the number of 311 calls (that’s the city’s non-emergency hotline), changes in property values and demographic changes by neighborhood. Marketplace host Kai Ryssdal asked her about what the data, and the interviews she did along with it, revealed.

Kai Ryssdal: Tell me, first of all, about this block up in Harlem that you sort of centered your research on.

Lam Thuy Vo: This is West 136th Street. And, basically, I crunched, I think it was 17 million 311 complaints in New York City to find this block. I wanted to see how this kind of phenomenon of “Permit Patty,” this idea that people are calling the cops on their neighbors bore itself out in a neighborhood. And so we found this one block that had seen a dramatic increase of 311 complaints, mostly noise complaints. And we wanted to see how it affected the people on that block.

Ryssdal: You had these complaints. Tell me, target is too strong a word, but they were calling about, in many instances, a certain set of people.

Vo: Yes. So there is this very strong Latino community on West 136th Street, and for decades they’ve lived on that block. And whenever the sun comes out in the summer, they would go out and sit in little fold-up chairs and then play dominoes, but also play music. Basically the whole block would come alive with this very rich New York City-centered stoop culture. And one of the people that we talked to was an 105-year-old man who had been sitting on that block for about 40 years. And because new people moved in who weren’t used to that kind of noise, he had to change how he led his life, how a lot of those folks who have lived on that block for a long time led their lives.

Ryssdal: Take this from Harlem down through the rest of Manhattan and out into Queens and Brooklyn, because these kinds of things — changing demographics and then and then the use of 311 and this kind of situation are happening in other parts of the city as well.

Vo: Right. So what we wanted to see was, how are gentrification and racial demographics related to 311 calls? And we found that there was a higher rate per capita of complaints in gentrifying neighborhoods or gentrified neighborhoods. There was also a demographic change where more white people had moved in, while in all other tracts, the population of white people had gone down. So we found that in Brooklyn, in Washington Heights, in Harlem… there was a clear correlation between the high level of 311 complaints and the demographics changing to become more white.

Ryssdal: You talked to some of these newcomers. What did they say?

Vo: So we talked to about 30 people on that block. A dozen of them were long-term residents who had been there for 40 years or longer or had grown up on that block. And then we also talked to people who had lived there for, let’s say, one to two years. And those folks were mostly like, “Oh yeah, it can be a little loud. I might not feel like I’m part of the community, but I’m not going to call in those complaints.” And then there were a smaller subset of newcomers and the people who we found who had used 311 were white, and they were saying that, “This used to be a bad neighborhood. This used to be a dangerous neighborhood. And I didn’t feel like I could approach this person so I called 311 who then connected as with the police.” I think that’s where also tensions may exacerbate tensions that have maybe existed before. Once you have the cops coming in and telling people to break up the domino games, they start feeling like they’ve been betrayed. A lot of the residents who had been living there for a long time told us that they had never heard of anyone coming out and being like, “Oh, can you tone it down?” That kind of communication is what in essence makes for a community in a neighborhood, you know?