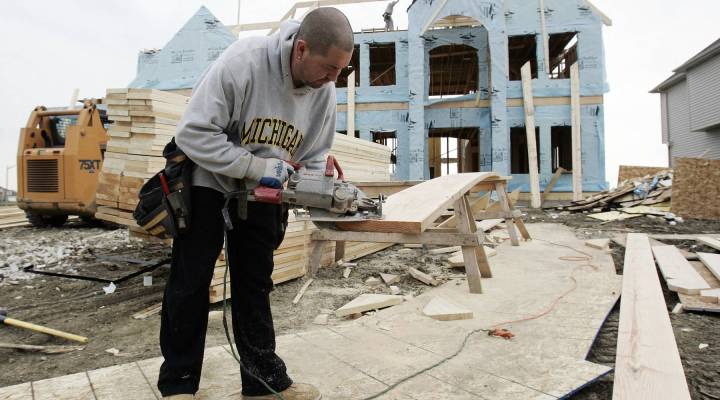 COPY
A builder works on a new home at a subdivision in North Aurora, Illinois, in 2007. Residential mortgage debt doubled between 2000 and 2008 in the U.S. JEFF HAYNES/AFP/Getty Images
Divided Decade

A builder works on a new home at a subdivision in North Aurora, Illinois, in 2007. Residential mortgage debt doubled between 2000 and 2008 in the U.S. JEFF HAYNES/AFP/Getty Images
Listen Now

This week, 10 years ago, Americans learned that the U.S. had its largest single-year drop in home prices in a quarter century. Not that this was shocking at the time. The housing crisis was in full effect, the spillover effects into the financial system were clear, and though not everyone knew it at the time, the country was a month into recession, as economists would later determine.

But before the recession, there was the housing crisis, and before it, the housing bubble.

It began, in many ways, in people’s heads. That is, after all, where hopes ultimately reside. As this century began, people felt great about housing.

“Oh, it was so hot!” Heidi Kasama recalled. Kasama is a longtime real estate agent in Nevada and president of the Nevada Association of Realtors.

“Literally, I remember one time I was entering a listing into the computer and the phone rang — I’m not kidding — less than a minute after I hit enter, and somebody asked me, ‘Is it still available?’ That’s how frantic people were.”

Home prices were rising and had been for years. Christopher Bishop, now president of the Greater Las Vegas Association of Realtors, had just begun his career in real estate in 2005.

“All of the market reports, all of the media coverage, everything was talking about how great the real estate market was, what a great opportunity it was, if you’re not doing it you should be. And everyone was investing in real estate, literally every person I knew,” he recalled.

The belief that housing prices could only, permanently, inexorably, go up was a collective hallucination, but it felt very real.

“And because there were fewer and fewer defaults early in the 2000s, mortgage lenders became more and more liberal,” he said.

Standards got pretty lax because, in a way, the banks were caught up in this same collective illusion as so many Americans. Lenders didn’t always require proof of income or documentation. People lied about occupancy status on 10 percent to 15 percent of mortgage applications, according to Christopher Mayer, professor of real estate at Columbia Business School.

“And so the lack of diligence meant that people were giving loans to anybody who walked in the door and wanted them,” Mayer said.

Kasama remembers asking one buyer why he bought his second home.

“And he goes, ‘Honestly, I was just driving by, and the new home builder flags were flapping in the wind, and they said you could buy this home no money down.’  And he said ‘Basically, kind of, before I knew, I’d purchased a home because I didn’t need anything — I didn’t need proof of income. They said the lender would put it together.’”

The amount of residential mortgage debt in the U.S. doubled between 2000 and 2008. Andy Haughwout is a research economist and senior vice president at the New York Federal Reserve Bank.

Of course, prices did not keep rising. Around 2006, prices started to fall, and the quickest to get into the housing market were the quickest to get out. They included people who were not as invested in owning a home because they didn’t live in those homes.

“As prices started to turn, they exacerbated the downward cycle by dumping properties on the market quickly and in large numbers,” Haughwout said. The same mania that drove prices up started driving them down.

As real estate agent Bishop recalled, “You would drive through neighborhoods and everyone had a for rent or for sale sign, I mean, everybody. It was crazy to see.”

“In Las Vegas, they literally called it the epicenter for foreclosures,” Bishop said. “And it wasn’t like, you know, it was just a few people in the neighborhood. I don’t care who you were, everyone was dealing with it. Either you were affected, or a family member was affected, or a friend was affected. Everyone had something.”

“I call it the brown-lawn syndrome,” she said. “You would drive through these communities. They were just parched lawns all over throughout these communities, it looked awful. It  looked like a bomb went off.”

These days, things are a lot different. The percentage of seriously underwater homeowners nationally has fallen from 31.4 percent in 2012 to about 10 percent today. Foreclosures are at an 11-year low. Banks are more regulated, lenders more careful about handing out loans. Even Las Vegas has a thriving real-estate market now, Bishop said.

“We all feel like we can breathe again,” he said.