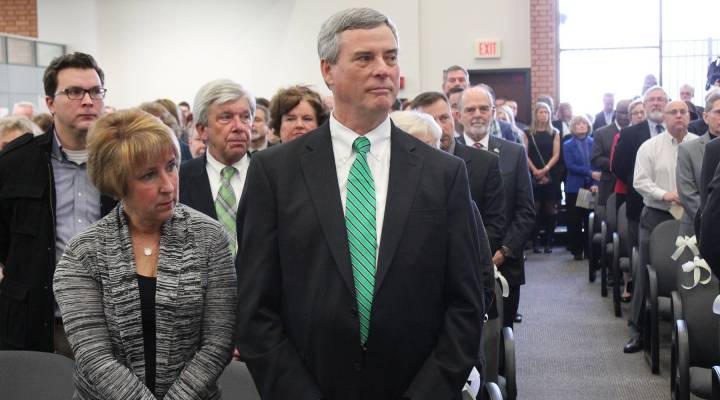 When somebody gets arrested, having a few hundred dollars in a bank account can mean the difference between sleeping at home and spending time in jail. But that’s not an easy proposition for people struggling to make ends meet.

Take Jasmine Borden. She was arrested in May 2017 on charges of child endangerment and leaving the scene of an accident. She is still awaiting trial in that case, but she spent a little over two months at the St. Louis Medium Security Institution before several community organizations raised $500 to bail her out.

“I became unemployed. I became homeless. My children were sent with my family so they could watch them while I was incarcerated,” Borden said. “If I was bailed out the next day, I wouldn’t have lost my job. I would have been able to pay my rent. And my children would have still been at home. I would have continued on with my life as normal as I possibly could have, still dealing with the case.”

The Bail Project, founded in November 2017,  is hoping to help thousands of people avoid Borden’s predicament. The group is seeking to bond 160,000 people out of jail in 40 cities over the next five years. The Bail Project will initially have sites in the Bronx. Tulsa, and St. Louis. With roughly $30 million in financial commitments from donors, The Bail Project’s Thomas Harvey is hoping his group will  prompt policymakers to come up with alternatives to requiring bail to get out of jail.

“If it’s someone who hadn’t committed the crime, getting them out is not only the difference between losing housing, jobs, transportation, connections to community, connections to family, it’s also probably the difference between pleading guilty or not,” Harvey said. “Getting a conviction that then sets you on a path to not being able to get the greatest job or having limitations to the jobs you can get in the state of Missouri — or having impact on your ability to vote in certain states.”

Harvey said his group will gather data on the people it bails out of jail. He’s also hoping that his group establishes deep relationships with activist groups that can point Bail Project employees to groups that are in need of help.

“You might have a high immigrant population in your jail we want to focus on, we might turn our attention there,” he said. “You may have a situation where there are folks that are transgender and they’re being misgendered in the jail and they may be in harm’s way. We focus our attention there. But overall, the idea is that we’re going to try to get people out.”

Beyond helping individual people, Harvey wants to provide momentum to activists like Kayla Reed, who has been part of a movement in St. Louis to get rid of bail altogether.

Reed said bail is inequitable. She pointed to a scenario where a wealthy person who is accused of murder can get out of jail right away, but someone who is facing a less serious charge languishes.

“It’s not an equalizer,” she said. “What it says is ‘if you’re wealthy or if you have access to resources, the justice system works for you.’”

Opponents of cash bail have made some headway. St. Louis, New Orleans and Chicago have moved away from requiring people accused of certain crimes from paying bail to get out of jail.

But getting rid of bail requires buy-in from judges and prosecutors. Missouri Association of Prosecuting Attorneys President Amy Fite said her colleagues are eager to listen to alternative ideas to bail. But she added there are instances where it’s necessary, such as when somebody is a flight risk or a repeat offender. That’s a message that St. Louis County Prosecutor Bob McCulloch echoed.

“And the whole idea of a bond is two things: One is to ensure appearance in court and the other is to protect the public,” McCulloch said.

Saint Louis University law professor Susan Woods McGraugh said there’s an alternative to bail: Holding somebody in jail without bond. Prosecutors, though, would have to work harder to prove that a defendant is dangerous or may not show up to court.

“I think that’s preferable than automatically imposing monetary bond conditions on every single person who passes through,” McGraugh said. “We start with a presumption in the criminal justice system now that a person is going to have to post money to get released from jail. That’s not the way we should look at it. We should look at it as people can be allowed to remain in the community unless and until the state establishes that they’re dangerous or they’re not going to come to court.”