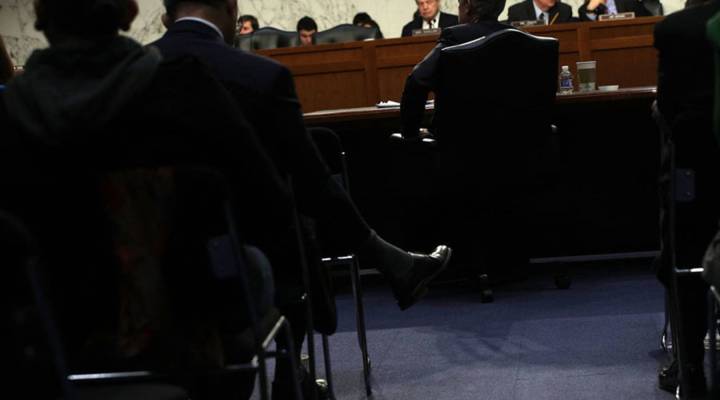 It’s a chilly Tuesday morning in December and the Senate Banking Committee has come together to vote on whether to exempt smaller banks from some of the regulations in the Dodd Frank financial reform law. Senators stake out their positions.

“If we learned anything from the financial crisis it’s that deregulation of the banks doesn’t create economic growth,” said Sen. Sherrod Brown, D-Ohio.

The usual suspects are in their usual seats — Michael Crapo, Bob Corker and Elizabeth Warren are all up on the dais behind the microphones. The hearing room is packed and Brown is on a roll.

“As Meatloaf used to sing, two out of three ain’t bad,” he said. “But this bill doesn’t even meet the Meatloaf minimum.”

Its easy to get the idea that today’s important work will take place on that dais, but there’s a whole other system of power and influence operating in this hearing room and its in the audience. Bart Naylor, a lobbyist for the watchdog group, Public Citizen, goes to several hearings a week. He’s been working this hearing for the past two hours — Public Citizen doesn’t want bank regulations rolled back.

“I’m in communication as we speak with various staffers about amendments that are being proposed,” he said.

That’s Naylor’s understated way of saying he’s in the room. And he’s been tweeting and emailing non-stop since the hearing began, jumping on comments that help the cause. Like this one from Hawaii Democrat Brian Schatz, who is upset with fellow Democrats for siding with Republicans.

When Schatz said: “What a shame that, in the United States Senate, the one place we can find room for bipartisanship is to give relief for financial institutions.”

Naylor tweets out: “Sen. Schatz — what a shame that the one area where we can achieve bipartisanship is on making banks more profitable.”

Did you catch that?  Schatz’s “giving relief” turned into Naylor’s “making banks more profitable.” Naylor is also emailing the Senate staffers sitting behind their bosses on the dais alerts like: “What do you need? Something to fire up the grass roots?  Retweets?”

Not so long ago, Lee Drutman was one of those staffers on the dais.

“Hearings today are almost like theater,” he explained. “It’s the lobbyists who are the directors and the producers behind the scenes.”

Drutman now researches lobbying at the think tank New America. He said lobbyists often write the questions lawmakers ask witnesses, they help choose the witnesses and those lobbyists are frequently in the room, in full view of the committee members up on the dais.

“And who’s there is a powerful signal to you, as to who actually cares about this,” Drutman said.

There’s also an audience outside the room and if a member of Congress gives a memorable performance, it can go viral.  Like when California Democrat Maxine Waters took Treasury Secretary Stephen Mnuchin to task.

Or when Republican Sen. Orrin Hatch had heard enough about how the Republican tax plan is geared toward the rich.

If you’re a congressional aide up on the dais, you just want to fade into the background as you slip suggested questions from lobbyists to your bosses. Mieke Eoyang is with the think tank, Third Way. She worked for Sen. Ted Kennedy, in the early 2000s and used to sit behind him at televised hearings.

“It’s really hard sometimes not to roll your eyes,” she remembers.

Even back then, you never really knew who’d be watching.

“And there was one point where I was sitting behind Sen. Kennedy and a clip of his questioning wound up at the “Daily Show” and there was my head floating over his shoulder,” she said, laughing.

Eoyang says it was a relief when Kennedy would attend closed-door hearings with no cameras and no manufactured drama.

“And there you really see members much more interested in getting answers from witnesses as opposed to making their own statement,” she said.

But on days like those, the influence ecosystem simply relocates to the hallway, where lobbyists can buttonhole members of Congress when they finally come out of the hearing room.