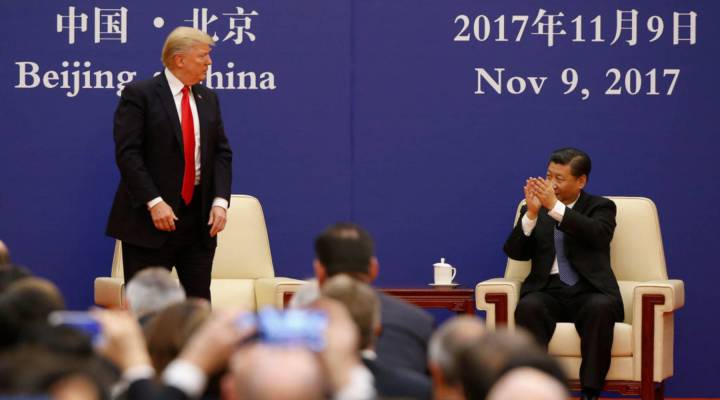 When President Donald Trump said the trade relationship between the U.S. and China is “very one-sided” and “unfair” to Americans, he was partly referring to the fact that Chinese companies can operate relatively freely in the U.S.  However, American companies that want to do business in China face government restrictions, especially if they want to invest, manage or lend money. Foreign banks own less than 2 percent of China’s total banking assets, which is low, even in an emerging market economy.

In early November, President Trump visited Beijing. Hours after his departure, China announced new measures that will give foreign banks and investors more ownership control over their operations in the country. So far, American firms haven’t been jostling to get in.

“It’s an important step forward,” the president of Principal Financial Group’s north Asia division, Thomas Cheong, said.  Yet, he doesn’t see any incentive to change his company’s joint venture with a local Chinese bank, in part because the partnership is working well.

Principal Financial has been in the asset management business in China since 2005, when it, like many foreign investors, was restricted to a minority stake with a local partner.

China’s Vice Finance Minister Zhu Guangyao said with the latest reforms, the country’s foreign investors will be allowed to hold up to a 51 percent stake in Chinese securities, fund management, future and insurance firms, with the option of 100 percent control further down the road.

China also plans to remove limits on foreign investment in Chinese banks, though, it is not clear when this might happen.

An American group that lobbies for financial services reform in China has welcomed the news.

“Once fully in place, this will level the playing field among local and foreign financial services firms in China,” the Engage China coalition said. The group counts the American Bankers Association and the American Insurance Association among its members.

This outlook may be too upbeat. Some long established Chinese players are now too big to beat.

“If you look at the lending market in China, it’s already quite crowded and competitive and I don’t see an obvious opening for foreign firms and capital,” said Brock Silvers, managing director of the Shanghai-based investment advisory group Kaiyuan Capital.

Some analysts said China is making a big concession to the U.S., perhaps to avoid any retaliation from Trump.

At the same time, China is worried about its bad debt.

“Banks and related financials have very problematic balancing sheets and these reforms seem a bit like an invitation to foreign capital to help bail out China’s credit bubble,” Silvers said.

Lian, who is also the director of China Banking Association’s industry development research committee, said U.S. banks and financial services groups have an “obvious” lead over the Chinese in terms of operations and especially risk management.

“The [announcement] is an attempt to attract more foreign investment and let them integrate further into China’s financial system, thereby improving our competitiveness,” Lian said.

Despite the latest policy reforms, there are many controls on foreign enterprises. Cheong said the insurance industry for example, had been the most restrictive for foreign investors.

“If you had more than 25 percent foreign ownership, your ability to grow your business is subject to getting one city license at a time,” Cheong said.

The latest changes to ownership rules do not address how quickly businesses can grow, nor does they ensure success in the Chinese market. What will shake up the industry is if China removes its capital controls.

“I think what will be really a game changer for the whole industry, is when the market opens up to allow Chinese investors to invest globally without restrictions,” Cheong said.

China is still a long way from that. However, it is important for American businesses to keep pushing for the Chinese markets to open.

“As China’s financial services industry grows, there will be demand for technical support and expertise from the U.S. head offices,” Cheong said, adding that his company has hired more people in the U.S. because of its Chinese operations.

So, Americans should want their businesses to do well in China, because it could create more high-paying jobs in the U.S.