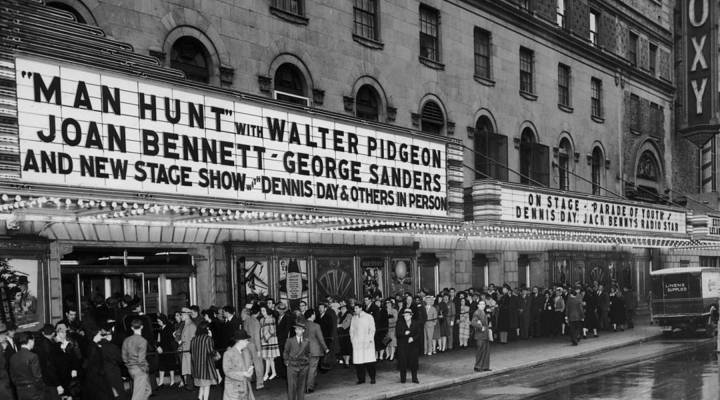 Movie theaters had a tough time this summer, ticket sales were the worst the industry has seen for the summer season in over a decade. But the movie theater business has never been an easy one. Theaters have been opening and closing, rising and falling with economic tides for years. In one American city, Baltimore, Maryland, there were 129 theaters open in 1916, 119 remained in 1950, but by 2016 there were just three. Photographer Amy Davis chronicled Baltimore’s theaters and the story of what became of them in her book, “Flickering Treasures.“ Marketplace host Kai Ryssdal spoke to her about the movie theater industry. The following is an edited transcript of their conversation.

Kai Ryssdal: What is it about these theaters that got to you, that made you want to spend however many years it was going in and taking pictures and finding these stories?

Amy Davis: The book started with one particular theater, a 1939 Art Deco gem called The Senator. I fell in love with this theater, and when it faced foreclosure, it was the last single screen theater left in Baltimore city. So I decided to do a documentary project and I didn’t know much about the subject when I started. I had kind of a naive view of theaters and movies because as a photographer, as a visual person, I just enjoyed the thrill of seeing a movie on a big screen. I didn’t really appreciate that movie theaters were also a business and that they had actually been opening and closing from the get go, not just in the more recent years like you think of. And so nine years later I have a book.

Ryssdal: We should back up here and because there will be people listening to this program who might not remember that it used to be that you didn’t have the multiplexes and the cineplexes,you had a theater in town or several theaters and down and they all showed only one movie, it was that whole single screen thing.

Ryssdal: The forward in this thing is by Barry Levinson and he says in fact, the Saturday matinee was an activity in and of itself. It was just the thing you did.

Davis: That’s right. And sometimes they would use their pea shooters to shoot at the screen so it was kind of interactive during the cowboy western movies. One movie theater owner told me the way he’d get rid of the kids was to show a few travelogues and then they would finally filter out of the theater. But truly the memories of being there all day, it’s a bittersweet experience when you look back at it now since so many of them have close but it’s something to be celebrated.

Ryssdal: There are also stories in this book of socioeconomic change, but also racial change in the city of Baltimore, as it relates to these movie theaters and the roles they play.

Davis: Race is a very important part of this story. Over the span of a century, that’s the movie going era that we’re talking about, all of the theaters were segregated. There were students at a black university, Morgan State, who picketed one particular theater that was near their university, The Northwood. And it became such a pressure point that it forced all of the theater owners to desegregate their theaters. So it was a significant milestone that happened in Baltimore.

Ryssdal: I wonder if you’re a romantic about these old theaters?

Davis: Well I’m less of a romantic than I was before. I realized now that they they are a business and they have to make money to stay afloat. But I think I’m still a romantic because all the people I met who have this passion for movies and movie houses, they all share a certain spark, they share a sense of imagination. So you have to be kind of a romantic and that’s what keeps us going I think.