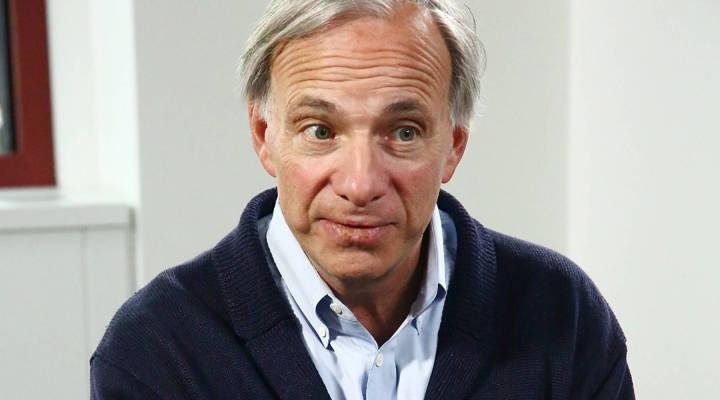 Bridgewater Associates is the biggest private hedge fund in the world. Its balance sheet is imposing and so is its corporate culture. Over the years, founder Ray Dalio and team have worked out algorithms for feedback in which investment strategies and management decisions are openly questioned, pressure tested and revised. Employees rate each other in real-time, electronically, during meetings. People earn points for knowing what they’re talking about and are thus deemed more or less “believable.” And then there’s “radical transparency,” in which most meetings are recorded and ready for playback.

The approach has naturally attracted attention over the years, and now, Dalio is going public with his methods in a new book, “Principles: Life and Work.” He joined us to talk about his approach, why it can be uncomfortable and how it leads him to make better decisions.

David Brancaccio: The Fed does stress tests of financial institutions. You have a system to stress test your own views your own opinions?

Ray Dalio: The basic thing that I learned is that I want to increase my probability of being right, and the way the stress testing works is in three steps. The first, you have to put your honest thoughts on the table. Can everybody do that? Second, you have to know the art of thoughtful disagreement. In other words, how do you listen, how do you take in, how do you exchange thoughts, so that collectively you can get to a better place than you had individually? And then third, if you have disagreements, then you have to have processes for getting around it.

Brancaccio: You’re very big on surfacing conflicts. What is that like in practice? Like you notice someone is not meeting your gaze, there is something going on, you don’t let that go on at all?

Dalio: The key is to be good with each other. If you’re radically truthful with the other person and you believe that that other person is going to be truthful with you, while that may be difficult initially in that moment, it builds better relationships and it builds better quality work. And then if you’re radically transparent with people so that they get to see things directly so that there’s not spin, that really makes an idea meritocracy.

Brancaccio: Part of that radical transparency is you keep close track of meetings over at Bridgewater, right?

Dalio: What we do is we tape everything for everybody to see, pretty much.

Dalio: Well, some video, some audio and so on. The basic idea is that if everybody could see things directly, there can’t be spin. So to bring it out and to have a discussion is great. We’ve been doing this for 42 years. It’s the reason behind our success.

Brancaccio: But you have to have a thick skin, right?

Dalio: You get used to it. What happens is there’s a process, and we find that about two-thirds of the people can get through, over about an 18-month period, this way of operating. And people worry about the other way. They don’t want to go back to the other way. When you go back to a normal organization and you start to realize you don’t know what the other people are really thinking, and they’re all talking behind your back, and when you have all that office politics, and that becomes something that becomes distasteful to people. And [at Bridgewater], they also can be more themselves. In other words, they know what their strengths and weaknesses are. So we have a situation where a lot of people it’s not for, and for those it’s for, they can’t get anything that’s quite like it.

Dalio: Well, I think that’s a simple question of “Is that talent that I’m going to lose because they’re not there something that means that we can’t really be truthful with each other? I don’t mean that it’s a 100 percent truthfulness or 100 percent transparency.

Brancaccio: Yeah, I know. Because if someone says to you, “Am I fat?” really, one knows not to answer that with radical transparency and truthfulness.

Dalio: If you were to ask me, “Am I fat?” I would answer you honestly, OK? But I would do it in a way that I would hope would be helpful, OK? But on the other hand, there are things that you don’t have to be totally transparent about, there are subjects. We don’t talk publicly about people’s personal issues. There are times that there’s conversations that are important, but there’s a long way to go from a typical organization to a lot more transparency and a lot more truthfulness.

Brancaccio: And you’re working on an app, some sort of digital assistant that would help a person navigate this?

Dalio: Yeah, we have an app, which we call a coach, and it operates like a coach. A coach would be almost like your GPS.

Brancaccio: And that’s the internal one for Bridgewater. But might this ever be outward facing?

Dalio: What I’d like to do is pass all of this along, and you know, we’ll do that, you know, in the not too distant future, in some way that I haven’t quite figured out.

Click on the audio player above to hear an extended version of our conversation with Dalio, including his first big mistake that began his quest for systems to test the things we think are true.