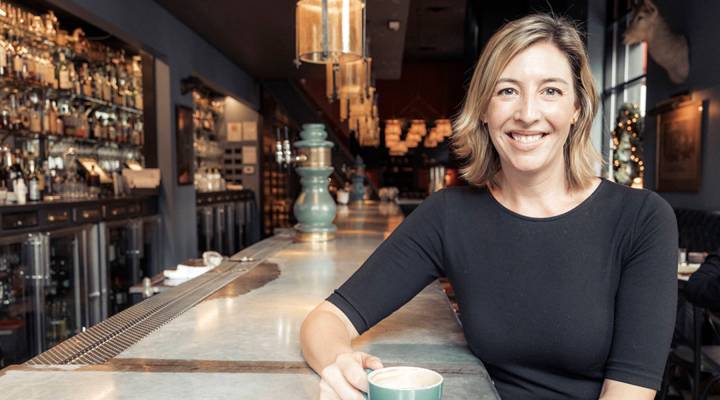 I have mixed feelings about this introduction. On the one hand, I’m beyond excited to take the reins of Marketplace Tech, a show I’ve been appearing on regularly since, if I’m guessing right, 2011, back when it was hosted by the venerable John Moe.

On the other hand, I’m sad to lose the wonderful Ben Johnson, who’s headed off into the wild world of full-time podcasting. I know he’s built a passionate and excited audience for Marketplace Tech, and he’ll be missed.

I’ll be building on the show’s great legacy, and bringing my own years of experience covering the tech industry to our broadcast and accompanying podcast. For those of you just getting to know me, I arrived at Marketplace a little over two years ago as fill-in host and senior tech correspondent. Before that, I was writing a personal technology column and doing an original video series at the New York Times, and before that I was learning everything I know about the tech industry at CNET, where I was a product reviewer, a columnist and commentator, the co-creator of one of the earliest podcasts on the web and eventually a video host, too.

In the course of this long career, I’ve interviewed industry leaders, like Eric Schmidt and Steve Ballmer when they were the CEOs of Google and Microsoft, respectively; Meg Whitman when she was at HP; Carol Bartz when she was one of the many CEOs of Yahoo; and fascinating characters in between, like Bob Weir of the Grateful Dead, of all things.

I started covering the net neutrality debate over a decade ago, and in the first week of the new Marketplace Tech, I’ll interview my third FCC commissioner about the topic (seriously, are we ever going to figure this out?). I’ve covered at least 15 CES conferences and attended an almost countless number of product releases and press events.

It isn’t all studio interviews and office visits, though. You’d be amazed at the breadth of topics that you can cover as a tech reporter. I think we all know by now that tech is integral to life, so sometimes reporting on it means sucking it up and going on adventures. I’ve jumped out of an airplane to test a phone company’s claims about its camera’s capabilities; I rode on an Americas Cup catamaran with some of the best sailors using the best sailing technology in the world; I’ve stuffed a three-foot esophageal nose tube down my throat to test a Stanford athletics research project.

And the fun hasn’t stopped at Marketplace. Sure, I’ve interviewed Microsoft CEO Satya Nadella, Chicago Mayor Rahm Emanuel, a bunch of other CEOs and executives, and lots of less well-known names who will probably change the tech world completely. But I also got to shoot T-shirts out of a giant robotic exoskeleton.

All of that and more is the type of stuff you can expect to hear on the new Marketplace Tech. This show is a wonderful daily update on what’s happening in the world of tech and business. Producer Stephanie Hughes (who’s amazing!) and I will sidestep the stories that everyone else is doing and focus on the technology that’s changing how we spend our time and how it, in turn, is changing the way we do business. I’m going to dig into the trends, the ideas, the personalities and the inner workings of this industry that consumes so much our lives.

We’ll be focusing a lot of time and reporting on a few key themes, which you’ll hear in fairly regular fashion on the show. For example, I’ve long been interested in the mechanics of venture capital, which in so many ways is the kindling that starts some of the biggest fires in the tech world: Google, Facebook, Apple, Twitter, Tesla and Uber all got their starts in a venture capitalist’s boardroom somewhere. It’s also a deeply mysterious, complicated world, in which a handful of people at a handful of firms make decisions that ultimately pick the winners in the world of technology.

We’ll be looking at the new economy of outer space, with occasional help from Marketplace’s Kimberly Adams, our political correspondent in Washington, D.C., who also happens to be a huge space geek and a fantastic reporter.

Finally, we’re starting a series called Evenly Distributed, in which we look at the ways that life-changing technology gets to some people but not others. The phrase is attributed to legendary science fiction author William Gibson, who said: “The future is already here. It’s just not very evenly distributed.” And to kick it off, we called up Gibson to ask him about his thoughts on that and many other topics. That interview was one of the best professional experiences of my life, which I think is saying a lot. Thus, it’s the first episode of Marketplace Tech with Molly Wood, and I hope you enjoy it.

You can hear everything we’re doing in our daily podcast, which is available from Apple or wherever else you get podcast, and if we’re on your local station (check here!) you’ll hear us on the air there, too. And for the really good interviews, the ones we know you’ll really want to get to the heart of, we’ll be posting them in their lightly edited entirety online, in a section we’re calling The Source Code. (I’m pretty excited about that name, I can’t lie.)

Thanks for listening, and please let us know what you think! You can find me on Twitter @mollywood, or just drop me a line directly at mwood at marketplace dot org. I can’t wait to hear from you.