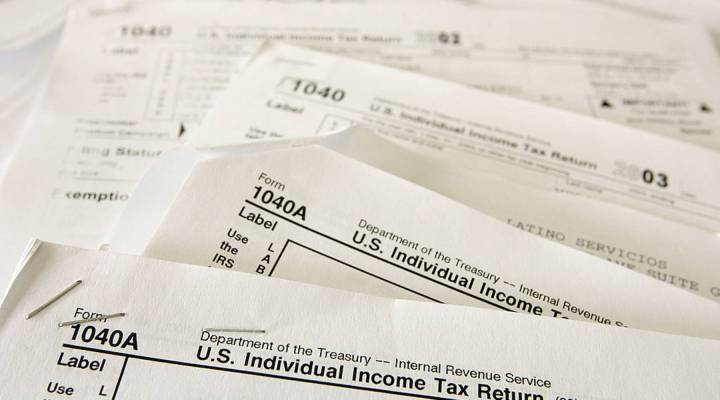 Discovering tax withholding is its own sort of rite of passage.

There’s that first job. And then, that first paycheck. Seventeen-year-old Leonel Tiscareno had his first job last summer as as an intern in the engineering department at the Port of Long Beach. He was getting paid $10.10 an hour. He worked 60 hours in the pay period. He was expecting $606.

But after federal income tax withholding, along with Medicare, state withholding, and Social Security, his first paycheck totaled $492.96.

“I was rather confused,” laughed Tiscareno. “I was like, ‘Where’d my money go?’”

Rewind to early 1943 and World War II. That was before federal income tax withholding as we know it today. Disney produced a film called “The Spirit of ’43” promoting the virtues of saving up for taxes. Donald Duck starred.

And it wasn’t just Donald Duck who struggled to save up.

During the war, tax rates went up, and a broader number of people were expected to pay them. Professor Anuj Desai from the University of Wisconsin Law School said there was a saying that income tax went from “a class tax to a mass tax.”

“The income tax was trading it’s morning coat for overalls; the idea that everyone was being subject to the tax now,” he said.

For the most part, the public discussion around withholding was focused on helping the taxpayer, on solving Donald Duck’s dilemma.

“The thought was that if we withhold a little bit every bit every paycheck, people won’t have to worry about the problem of coming up with a huge chunk of money,” Desai said.

But withholding is also a remarkably efficient way for the government to raise money, and policymakers knew that.

“You could never have the taxes that were levied during World War II without withholding. It was absolutely essential for that purpose,” economist Milton Friedman said in an interview he recorded in 2003 with the nonprofit Free to Choose Media. Friedman worked with the Treasury Department at the time withholding was introduced.

Withholding stuck around after the war, much to Friedman’s chagrin.

“Unfortunately, once you got it installed, it’s almost impossible to get rid of it,”  Friedman said. “It’s too useful to the people in power.”

Others also have doubts about withholding.

“One of the things that withholding does is it encourages citizens to hold citizenship cheaper, and hold the government cheaper,” said Jonah Goldberg, a fellow at the American Enterprise Institute and senior editor at the National Review. He said withholding anesthetizes us to the actual cost of government. Sure, we feel the pain initially with that first job and that first paycheck. Later, people tend to lose track of what they’re paying.

Goldberg argues that withholding accustoms us to government spending. We feel like it’s funded by other people’s money, not ours. But realistically, getting rid of withholding isn’t gonna happen anytime soon.

“Withholding and its close companion, information reporting, is absolutely necessary to get compliance with the tax laws,” said the Urban Institute’s Eugene Steuerle.

If our employers didn’t tell the government how much we make, and if they didn’t pay our taxes for us, some of us wouldn’t pay up.

What would you like to see changed about the tax code? We want to know. We’re on Twitter @marketplace