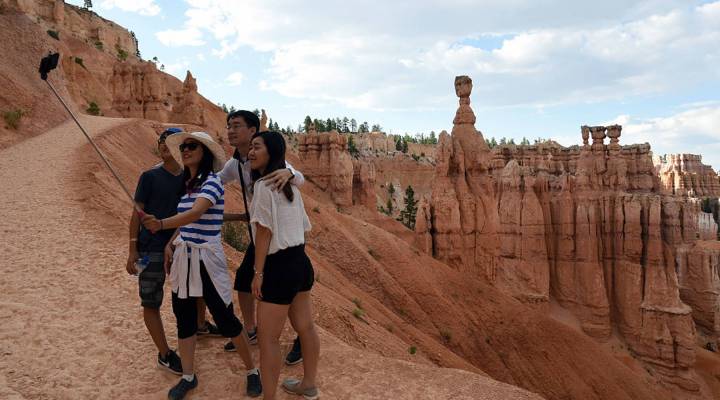 Adriene Hill and Maria Hollenhorst May 29, 2017

This Memorial Day, you may have to brace yourself for the onslaught of social media posts from friends on outdoor adventures. Instagram and other social media can send hordes of people into highly photographable places. With almost 331 million visitors, 2016 was the third record-breaking year in a row for the National Park Service. But all that extra traffic from selfie-snapping tourists can harm the places they visit.

Casey Schreiner is editor-in-chief of the outdoor website Modern Hiker, and has previously reported on National Park vandals that post their crimes on Instagram. He sat down with Marketplace’s Adriene Hill to talk about social media’s impact on the great outdoors. The following is an edited transcript of their conversation.

Adriene Hill: So how has social media Instagram changed the way people are experiencing the outdoors?

Casey Schreiner: Well, it’s changed in a lot of ways. The phrase that you hear most often is that these parks and trails and public lands are being “loved to death.” Basically they are the modern form of sort of publication and awareness, but a lot of times these parks are not equipped to deal with that onslaught of people that come.

Hill: All that love.

Schreiner: Yes, with all that love. In this case — in some cases — too much love can be a bad thing. And another thing with Instagram and social media is the information that you’re getting is not always the best. So we’re getting new people into the park, which is great, but a lot of times those new people aren’t necessarily educated on “leave no trace“ ethics, or how you act in the wilderness, why you shouldn’t walk on this certain type of soil, or why you shouldn’t take a rock, or why you shouldn’t leave some graffiti on the trail you’ve left.

Hill: So are they ruining it for the rest of us?

Schreiner: You know what? It’s really difficult. I think at the end of the day it’s a net positive, because you’re getting people into these special landscapes and they’re experiencing them in many cases for the first time. So if you can get people out to these public lands, and they can see what makes them special and what makes them magical, then you have the chance of turning even a small portion of those people into outdoor stewards. Those public lands live and die by the people who care about them. Speaking of the good side of social media, I’ve actually met and interviewed people who just started picking up trash on their own and documenting it on Instagram. And now they have this huge hiking group that goes out every weekend to these popular trails with huge trash bags and cleans them up. And that’s a thing that would not have happened if social media wasn’t around

Hill: Are officials and sort of the folks in charge doing enough to help keep these places safe? Keep them un-vandalized and keep the litter off? Are people going far enough to protect these spaces?

Schreiner: A lot of times these places are severely underfunded. I think the National Parks alone — not including National Forest monuments or anything else — has something like a $5 billion backlog of essential maintenance. This is like really, really hard core stuff. Roads can fall apart, bridges can fall down, and it’s been that way for a long time. This is not a new thing. This is a decades-long experience.

Hill: And I have to imagine the increase in visitors helped that?

Schreiner: It’s a double-edged sword, because the increase in visitors increases the funds that people get from entry fees, but it also increases the amount of use of the trails, obviously. Last year, the National Park Service celebrate its centennial with a really big PR campaign. And I think the visitorship went up in pretty much every national park. I think last year, Joshua Tree had 2.5 million visits, which was up over half a million from the previous year. Joshua Tree is, unfortunately, one of the parks that is really getting loved to death right now because it’s so close to LA as a population center.

Hill: Are there best practices for Instagram seeing that beautiful view I see on my hike?

Schreiner: Yes there are, and unfortunately many people don’t follow them, which is kind of disappointing. On Modern Hiker we never give the geolocation of a post when we’re posting it, because a lot of times that’s the laziest barrier of entry to finding out where to go. A lot of people see a photo, they click on the geotag, they find out where it is, and they use Google Maps to get there. You’re not getting any information about what that park is, why it’s special, what the rules are, what the “leave no trace” principles are…

Hill: So is geotagging just a functionality you turn off on your phone?

Schreiner: You don’t necessarily have to turn it off, but what you can do is just not tag it. So there are instances where the geotagging is baked into the image itself. And in that case, if someone wanted to reverse engineer it, they could find out where it is. The casual Instagram user is not going to do that. We actually used that to find some National Parks vandals a couple of years ago. The graffiti artist Mr. André, we caught him vandalizing in Joshua Tree using exactly that method. When you’re Instagramming, you have a choice of tagging the location the same as if you’re on Facebook. You can check yourself into a building or a concert or a venue or whatever, and you can just choose to not tag it when you’re tagging the image. So it just shows up in the image, and it doesn’t get a get a location and then you have to read the small paragraph, which I know is a big barrier for a lot of people. But it’s amazing when you read something, you actually learn some things sometimes.