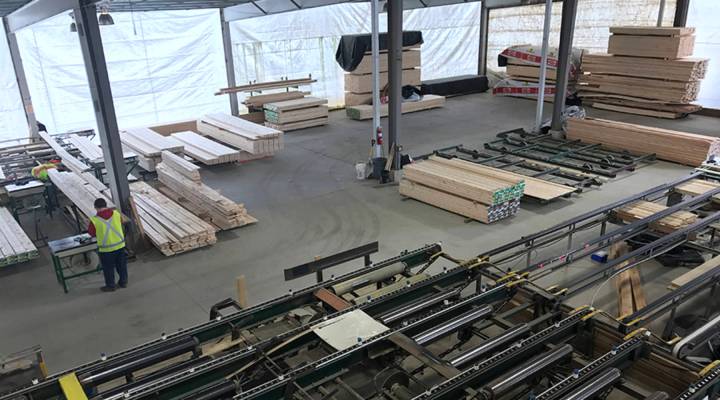 COPY
A worker at Pine Profiles, Inc. in Creston, B.C., one of the many businesses affected by tariffs on Canadian softwood lumber. Nate Hegyi

A worker at Pine Profiles, Inc. in Creston, B.C., one of the many businesses affected by tariffs on Canadian softwood lumber. Nate Hegyi
Listen Now

Workers from the WynnWood sawmill in southeastern British Columbia are buying bags of chips and hot dogs at a nearby gas station. Owner Betty Ann Gordon is at the counter, ringing people up.

Like many folks around here, Gordon’s business depends on the mill. And right now there’s some uncertainty. “Nobody knows … what’s going to happen,” she said.

That’s because a trade war is brewing between the United States and Canada over timber. New timber tariffs could save mills in the U.S., but at the cost of jobs in Canada. In May, there were shift cuts at seven sawmills owned by Resolute Forest Products in Quebec, affecting more than 1,000 workers. And in British Columbia – a major world exporter of softwood lumber – mills and timber workers are bracing for more.

In April, the Trump administration slapped tariffs on softwood lumber coming across the border, making the wood up to 24 percent more expensive. It’s something U.S. lumber producers have been asking for, and it’s a test of Trump’s “America First” trade policy. But it could also cost British Columbia more than 1,000 timber jobs.

And Canada is putting up a fight. It’s threatened to ban or tax U.S. goods coming across the border, including shipments of coal through a seaport in Vancouver. That port is a lifeline for Cloud Peak Energy, one of the largest coal producers in the U.S.

Canada has also proposed aid packages to assist forestry workers and companies hurt by the duties.

Timber layoffs aren’t new in Canada. When a trade agreement with the U.S. lapsed in 2000, Canada lost 20,000 timber jobs. Since then, some of the country’s largest lumber producers have hedged their bets against potential tariffs by buying sawmills in states like South Carolina and Georgia, where the lumber they make won’t be taxed by the duties. Harry Nelson, a forestry professor at the University of British Columbia, said these larger companies could also benefit because they own a lot of mills.

“So if they’ve got to reduce production, they can at least shut down maybe one of their mills but still keep their other mills going,” Nelson said.

But not every timber company has that flexibility, he says. “That’s not an option for a smaller company that may only have one mill.”

And it’s these small, family-owned mills that will be bruised.

“They’re the ones that have got the most to lose,” Tanya Wall, a local politician in Creston, said.

She also works at a small, family-owned mill and said the duties could cut into profit margins and eventually cost money and jobs. Money and jobs the U.S. wants.

Canada took advantage of an expired trade deal in 2015 and sold lumber at unfairly low prices here in the U.S, and that hurt mills across the country, says Gordy Sanders, a resource manager at Pyramid Mountain Lumber in Seeley Lake, Montana.

“The small family-owned mills in the U.S. … have suffered financially,” Sanders said.

There were layoffs, shift cuts and mill closures. The new duties, Sanders said, could help even the playing field and eventually save some timber jobs in the U.S.

“It sheds a little light at the end of the tunnel,” he said.

But that same light is dimming for timber jobs in Canada.

The Trump administration is expected to announce a second round of duties on Canadian softwood lumber that could cost even more jobs north of the border.