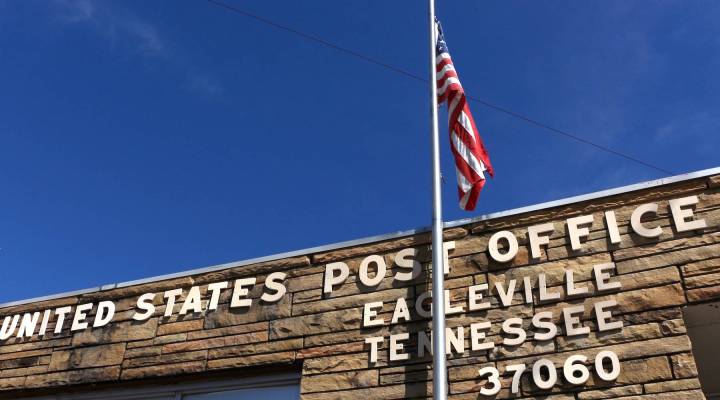 In some rural parts of the country, people still dispose of wastewater using septic tanks. That’s partly because building a full-blown sewer system is an expensive proposition.

In Tennessee, one small community just outside of Nashville is finding that building a sewer can also help with economic growth.

Eagleville, a one-stoplight town of 650 people, is seeing its first major development interest in about a decade — largely attributed to the new infrastructure. Yet anyone closely involved with the city also knows that it has been a slog of at least two decades to finally move the town from septic tanks to the new municipal sewer system.

Until 2015, flushing a toilet in Eagleville could lead to a septic puddle forming in the backyard.

Ideally, septic systems filter out waste and only send water to absorb into a drip field. But aging and faulty systems had become a smelly hazard, raising health concerns and killing the reputation for local businesses, said restaurateur Mike Zelenak.

“I know there were some bad storms where you could literally see raw sewage out on the sidewalk,” he said. “The septic tanks could only take so much.”

Back in 2014, he was hoping to build Eagleville’s second restaurant, the Maple Street Grill. But he was hesitant.

“One of the agreements we made was that we were not going to open if we couldn’t get tied into the new sewer system,” he said, “because you just can’t do business that way.”

Eagleville’s sewer system extends far enough for the town’s key employers to tie in, along with the K-12 Eagleville School.

When the sewer did come on line, Zelenak’s restaurant was the first to connect. Kitchen staff opened all the faucets and ran the industrial dishwasher, and flushed — all at the same time. No problem.

“Customers that live in the area, that know Eagleville, have commented how much different it is when they walk into the building that they don’t notice it,” Zelenak said. “You just don’t notice that odor anymore.”

Eagleville eventually had the help of a U.S. Department of Agriculture rural grant to develop the sewer. Mayor Travis Brown, a part-time mayor and auto repair shop owner, said it took decades to wade through local resistance and secure the grant.

“A lot of those houses were built, and those businesses were built, before we knew as much about wastewater as we do now,” he said. “Some of those systems were so old, they were failing. Some weren’t designed well to begin with.”

Meanwhile, officials had been hamstrung by meager tax revenues. Annual sales and property taxes bring the town about $1 million, so the prospect of building a $3.1 million sewer was daunting, officials said. The USDA grant covered the maximum-allowed — 49 percent — and a low-interest loan helped with the rest.

The system extends far enough for the town’s key employers to tie in. And the K-12 Eagleville School also uses it, replacing a perpetually mucky septic area next to the football field.

“It was literally to the part where you were watching football games there at the school, that the smell was horrific,” Brown said.

And now? “Yeah, it’s a lot nicer out there on a Friday night, watching those football games,” he said.

Just across the street from the field, the town has a strong indicator of sewers as stimulus.

City Manager Andrew Ellard said developers have proposed a 50-home subdivision on 18 acres, the first major development in more than a decade. A dentist office is planned. And he’s noticed an uptick in property sales and building permits.

Plus, there’s the promise of more residents — maybe as many as 150 if families move into the subdivision — and they would likely deliver additional tax revenue.

“We’re talking a pretty good moving of the needle there,” Ellard said. “You know, 20 percent or so population growth over the course of just a couple, or few, years.”

That’s the kind of growth that larger cities nearby, that have sewer systems, have already seen. Eagleville will still be a small town, but one with a sewer system helping it to grow.