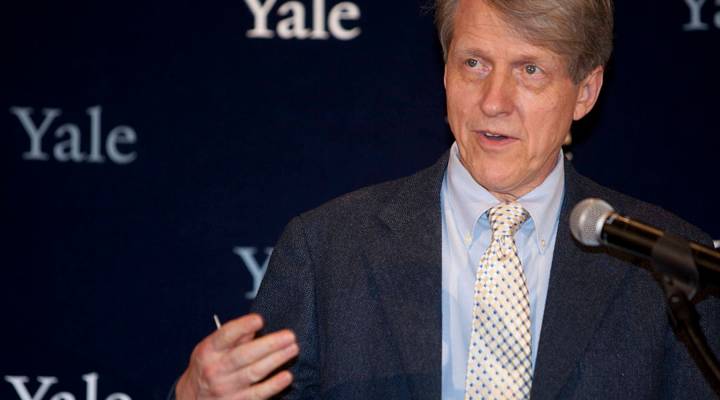 It turns out, there may actually be a thing or two that economists can learn from English majors — students of literature are well trained to spot narratives. And now, maybe more than ever, the prevailing story getting all the buzz can have a real impact on the economy.

Robert Shiller is a professor of economics at Yale University and recently wrote a paper titled “Narrative Economics.” Kai Ryssdal spoke with Shiller about how stories can sway the economy and why economists would do well to pay more attention to popular narratives. Below is an edited transcript of their conversation.

Kai Ryssdal: First thing I think we need sir is a, is a sort of a three-sentence description of what you mean by narrative economics.

Robert Shiller: Narratives are talked about by a lot of journalists, social scientists but not particularly by economists. What is a narrative? It’s a kind of gem of conversation that gets repeated again and again. It goes viral. It changes people’s perspectives, their norms, their scripts and changes people’s behavior. Economists should pay more attention to these narratives. If you want to know why things happen — why did we have the great financial crisis? Why did we have the Great Depression? — questions like that are not satisfactorily answered by economists because they don’t pay enough attention to narratives.

Ryssdal: I mean, you’ve been an economist for a good long while, why do you suppose it is that the economists have not paid attention to the stories that are going on out there?

Shiller: First of all, some of them do. I think some of the best of them do. Also, our policymakers — people who actually have to meet the real world — they intuitively pay attention to narrative. So for example, in the recent financial crisis, 2007 to 2009, the old narrative about bank runs, which had been forgotten, was coming back, and our banking authorities decided we are not going to have a bank run. We will bail them out. This was contrary to a lot of political thinking, and it didn’t seem right, but they did it because instinctively, they knew. We don’t want to renew that Depression-era narrative.

Ryssdal: OK, but here’s the thing, and you say this in your paper: Narratives are inherently subjective. The way we perceive the stories that we’re told vary on an individual basis.

Shiller: Yeah, and this is another reason why economists feel uncomfortable about talking about narrative. It sounds a little bit unscientific. Leave it for people like you — journalists. But I think they’re not incompatible, actually. We can do statistical analysis of narratives, but we shouldn’t get too carried away. Ultimately, narratives are human phenomena that require judgment. You have to judge what the narrative is and why it influences thinking. But still I think economists can do it, and increasingly, they are.

Ryssdal: The thing that’s interesting about the Trump narrative that we’re in the middle of though is that if you look at how it’s being perceived by a lot of people, consumer confidence is up, the stock market is up. Many indicators are trending in a positive direction based on this narrative.

Shiller: The narrative that Donald Trump has invented — and we’ve got to give him credit, he’s a genius at narratives — it comes out of a public image that he has developed over a long time. Notably, his “Apprentice” TV show, which began over 10 years ago. That was a narrative presenting him as a mentor … the real thing, because he himself appears to be a big success in business, tough guy. He comes at a time when people think that we need a tough guy. That’s really the thing you have to appreciate about narrative. They survive because they are contagious, because they attract attention. Trump is kind of a unique person because there aren’t that many billionaires who have a narrative concept down so firmly.