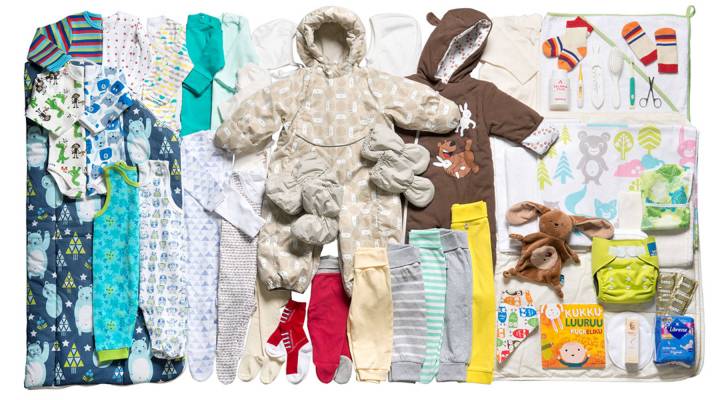 It’s the season of giving, but here’s one gift most Americans couldn’t imagine receiving: a starter kit for expectant mothers, from their government.

In Finland, that’s been a tradition since 1938. After a woman shows proof of a pre-natal check before her second trimester, the state gives her a sturdy cardboard box of 50-odd baby items  — bedding, clothes and other infant necessities. The box itself doubles as a bassinet. Moms can choose to take the baby box, or 140 euros in cash, about $145 in U.S. terms. Most choose the box.

Finland started the baby box give-away when the country was much poorer and infant mortality was much higher. At first, only low-income families got the gift, but in 1949 the government decided to hand them out to all expectant moms. Ollie Kangas, director of government and community relations at KELA, the agency that handles them, said the box symbolizes “that all citizens who are born in this country, they are equal and they should have equal possibilities to start their lives.”

Finland also gives the boxes to non-citizens who live in the country.

The contents change somewhat every year, but 2016’s included a snowsuit in a gender-neutral color that can turn into a sleeping bag, infant onesies, socks, a bath towel, a drooling bib and a baby book in Finnish and Swedish.

Some of the contents represent what economists like to call “nudges” toward the latest practices in baby care.  In 1969 the box included disposable diapers, but the Finns reversed course in 2006 and reinstated a cloth diaper cover and four “cotton gauze inserts,” for environmental reasons. They also omitted a bottle, to encourage moms to breastfeed.

There’s stuff for Mom and Dad, too. This year’s version came with sanitary napkins, condoms and lanolin cream for mothers sore from breastfeeding.

Fans of the Finnish baby box believe it’s one of the reasons the country has one of the world’s lowest infant mortality rates – 1.7 per 1,000 births in 2015, according to the government. The country also funds a national health insurance system.

In recent years, other countries have toyed with the idea of handing out baby boxes. In the U.S, hospitals in Fort Worth, Texas, will start handing them out, partly to encourage parents to sleep separately from their children. Another behavioral nudge. The county’s infant mortality rate is significantly higher than the national average – 7.11 per 1,000 births in 2013.

Finland’s maternity box has also inspired a handful of companies making and selling baby boxes for profit. Three dads in Finland started Finnishbabybox.com a few years ago.  Their website was selling two versions recently, the “original” for $449. A premium version, with designs from the popular “Moomin” book and TV series, was selling for $669.  There’s also Britishbabybox.com and other brands.

One item Finnish moms won’t find in their free maternity box is a pacifier. Nudge, nudge.