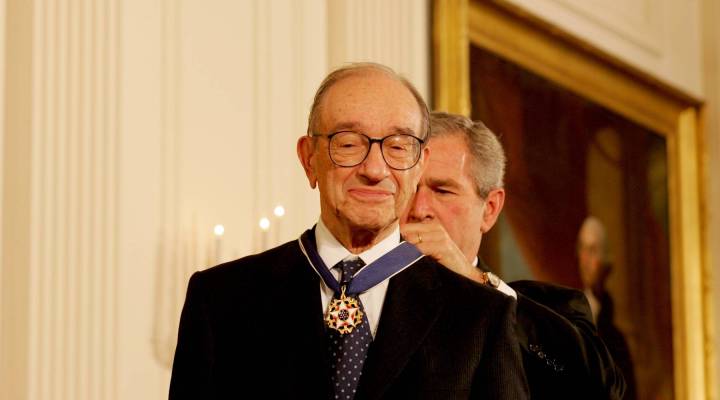 Once lauded as the “maestro” for his ability to lead markets like an orchestra, former Federal Reserve Chair Alan Greenspan faced criticism after the 2008 financial crisis for his inability to halt the economic downturn before it started.

Sebastian Mallaby is the author of the new biography “The Man Who Knew: The Life and Times of Alan Greenspan.” Mallaby spent half a decade researching and interviewing the former Fed chair and spoke about his book with Kai Ryssdal.

He was spending hours by himself while his mother was out earning a living in the Depression as a sales clerk in a department store. His father left his mother, so he was without that, and I think that introverted, stats-crunching personality that people got to know in America later was very much formed in the crucible of his childhood.

On what Greenspan knew:

He predicted the problems in the real estate market in the 1970s, and then precisely the same kinds of problems came back in the 2000s and he was presiding, and you thought he would do something. And what’s really amazing is when you read the deliberations between Greenspan and his colleagues at the Fed in the 2000s, he does see that there’s a problem. He talks about frothy markets and he wonders, “Should the Fed do something about this?” That’s why I called my book “The Man Who Knew,” but he was not the man who acted.

… Greenspan famously said “I found a flaw, I found a flaw in my world view, in my ideology.” And people seized on this, as if this was the moment of confession — showing us that the real reason we had a financial crisis was that we had somebody in charge who was a naïve believer in the self-policing efficiency of markets. The truth is that Greenspan never thought markets were efficient. I mean, having spent five years reading everything he ever said and wrote, I know. … The reason we had a crisis is not that Greenspan didn’t understand things about the inefficiency of markets. It’s that there were political constraints, personal constraints on how far he was willing to go act against a bubble.

He transformed the status of the Fed. … Greenspan was able to fight back against the politicians, because he himself was political, and thereby create space for the Fed to be above politics. And by the end of Greenspan’s tenure, the Fed’s reputation was so exalted in the nation’s consciousness that you could have the extraordinary moment after the 2008 crisis when Ben Bernanke went to see the leaders of the House and Senate and said he was going to bail out AIG. Bernanke couldn’t have said those things; he couldn’t have acted in that way if Greenspan had not been there first to build up the Fed to the point where its prestige made that possible.

Memoirs + BiographiesShelf Life
Tags in this Story
Share this Story