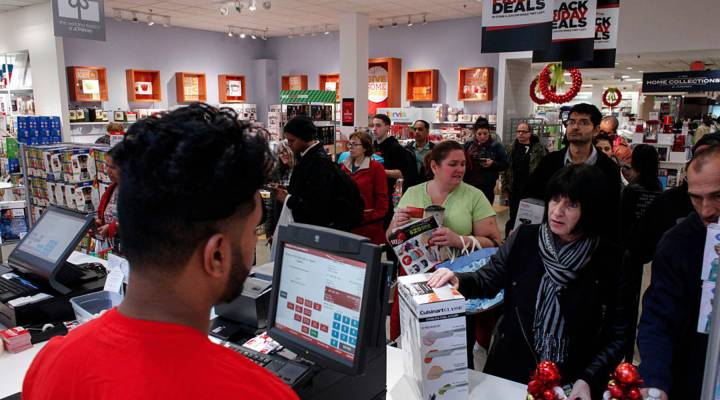 COPY
Customers pay at a cashier station in a JCpenny during Black Friday. Kena Betancur/Getty Images

The Obama Administration called a new Labor Department regulation on overtime a major win for workers, but it has some companies declaring they will change their business models to reduce payroll costs.

The regulation won’t go into effect until December 1. Caleb Sneeringer, a former Walgreens manager in Waco, Texas, said he knows people who would be affected by the rule change, but the word hasn’t gotten to them yet.

There are two ways to become eligible for overtime. Being paid hourly wages. Butmployers often get out of paying it by classifying workers as salaried managers. Or earn less than a specified amount. Before, a manager at a Walgreens making more than $23,660 wasn’t eligible for overtime. As a result, those employees were often given more work because it was, essentially, already paid for.

Dawn Hughey worked in retail for more than 20 years until she was injured on the job and retired. She is now something of a spokesperson for this rule change.

“When I applied for the job at a Dollar General, they told me that position would be 44 hours a week, varied schedule, maybe a couple of nights,” she said. “And that was not true very long. I was opening and closing the store every day, so from 7:30 in the morning to 10:30 at night, every day, seven days a week.”

Under the new rule, Hughey would have been paid a lot of overtime hours at time and a half. For employers, that’s expensive. Businesses are already talking about eliminating the salaried positions altogether and just paying those employees an hourly wage.

Another other option is bumping the managers’ salary to just above the threshold, to make sure they don’t qualify for time and a half.

Dawn Hughey said either solution is a win for workers.

“What if they take all the store managers and put them just above $50,000 a year?” she said. “There’s going to be a whole lot of happy store managers because Dollar General doesn’t pay anybody close to that amount. Fine, let them take them above the $50,000 a year. You know, that would have made me very happy.”