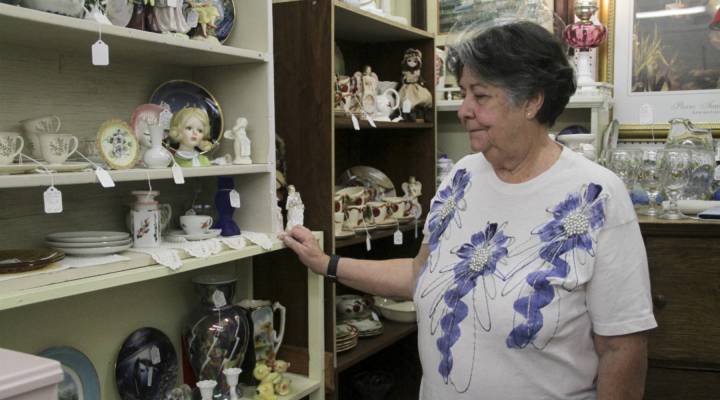 COPY
Susan Perkins stands in her antiques booth in Prescott, Arizona. It's one of several jobs the 72 year-old has to supplement her income. Mariana Dale
Economic Anxiety Index®

Susan Perkins stands in her antiques booth in Prescott, Arizona. It's one of several jobs the 72 year-old has to supplement her income. Mariana Dale
Listen Now

This week, we’re rolling out the latest round of results from the Marketplace-Edison Research Poll, and one of the ways we measured how people feel about the economy is through what we call the “Economic Anxiety Index.” It looks at how stressed people are about their financial situations, and it’s gone up since we first started tracking the information last fall.

This is especially true for young people like Kyle Ojima in Washington, D.C.

Kyle Ojima recently graduated and spends most of his days in coffee shops applying for jobs online.

He’s 28, recently finished a master’s program, and he’ll have to start paying back his $60,000 in student loans soon.

“I think my body reacts more than my head does, if that makes sense,” he said, referring to how anxiety over his finances affects him. “So, for instance, I didn’t have white hair like six months ago, and I don’t sleep much.”

About a third of people in our poll said they were in the same situation, with their financial situation causing them to lose sleep at night.

Carl Van Horn, a professor of public policy at Rutgers who wrote several books on the American workforce, explained the disconnect between positive economic trends and the way individual people feel about the economy.

“We’ve created millions of jobs and steady growth,” he said. “But there’s still that hangover, if you will, of anxiety that was related to the devastation they experienced [during the recession], and then there’s the uncertainty about what’s going to happen next.”

She recently sold some of her family jewelry to help pay her bills, and said she’s confused when she hears reports about the economy improving.

Perkins is still working to supplement her Social Security payments. She works in an antique booth, renovates mobile homes, has a reverse mortgage. But it’s still not enough to meet her monthly expenses.

That’s why she turned to a friend who ran the shop next to hers to sell her father’s bolo ties with their silver clasps and leather cords, her mother’s turquoise-studded necklace and her family silverware.

He paid her about a thousand dollars for 30 pieces of jewelry.

Susan Perkins sold her parents’ western-style jewelry and silver flatware to a friend in a nearby shop  to help cover her expenses.

“I’m having to sell almost everything my parents gave me,” she said, trying to control her tears. “It feels like I let my parents down.” She said if she’s careful, she has enough money to last her about five more years. After that, she said, who knows?

How do you feel about  your own economic situation? Take the Marketplace Economic Anxiety quiz and find out how your number compares to those who were surveyed in the poll.