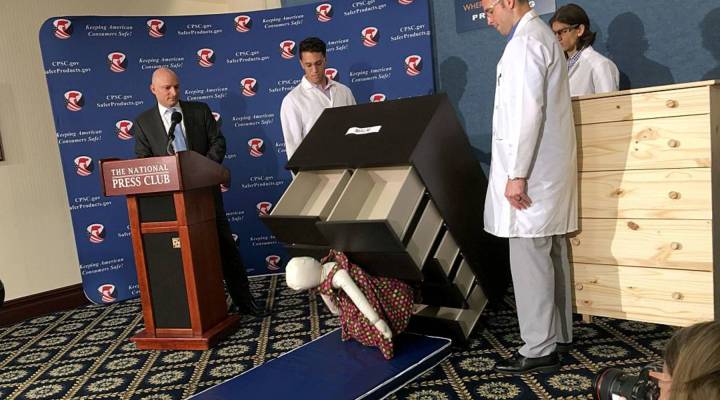 Consumer Product Safety Commission Chair Elliot Kaye and CPSC employees watch as a falls under an Ikea dresser during a live demonstration at in Washington, D.C. on Tuesday. Ikea is recalling its hugely popular Malm line of dressers after several children were crushed to death when they tipped over.  CARLOS HAMANN/AFP/Getty Images

Consumer Product Safety Commission Chair Elliot Kaye and CPSC employees watch as a falls under an Ikea dresser during a live demonstration at in Washington, D.C. on Tuesday. Ikea is recalling its hugely popular Malm line of dressers after several children were crushed to death when they tipped over.  CARLOS HAMANN/AFP/Getty Images

If own some Ikea furniture, a staple of dorm rooms and family dens alike, you may have to choose between recall dollars, or simply add screws.

The company is recalling tens of millions of dressers due to falling risk, the U.S. Consumer Product Safety Commission announced Tuesday.

The recall — one of the biggest ever, according to the CPSC — affects up to 36 million Ikea products, from Alesund to Vollen. Most notable is Ikea’s popular line of Malm dressers, which have tipped over and killed three toddlers in the U.S. and injured over a dozen more, the CPSC says.

Ikea has already been running a campaign encouraging people to anchor their dressers and shelves to the wall, giving away free anchor kits. A third tip-over death in February finally triggered the recall. Ikea’s the largest furniture retailer in the world, and for budget-conscious shoppers of a certain age the Malm line is a staple — there are four Malm dressers and a a couple beds and nightstands in my family alone.

The whole thing got us wondering: after putting together their Ikea furniture, how many people actually anchor it to the wall?

From @Marketplace morning meeting: “Do you bolt your IKEA crap to the wall?”

Some of you had jokes:

@kairyssdal @Marketplace My entire apartment is an IKEA balancing act.

@kairyssdal @Marketplace I put all my furniture sideways, so it can fall over. It’s already over. Much safer that way.

@lizzieohreally @tobinlow @kairyssdal @Marketplace I use my IKEA stuff to support my other IKEA stuff.

Our listeners who have children, or live in Southern California (where Marketplace is based and earthquakes abound) were more likely to secure their stuff — or at least acknowledge they should be.

@kairyssdal @Marketplace Yes, since I had kids. Good idea with all tall furniture, not just IKEA, and the IKEA instructions clearly say so

@kairyssdal @Marketplace didn’t when renting, then were used to un-bolted when we bought, and I mostly just hope the kids don’t climb on it

Turns out our listeners, on Twitter anyway, are a practical bunch.

@Marketplace Not just the IKEA crap. Lot’s of expensive furniture out there that poses a tip over risk. Do you even physics?

So, if you have one of these risky dressers, what do you do? Ikea is urging everyone to secure their stuff to the wall — they’ll give you a kit and even come install it for free — but customers are also entitled to a full refund, or store credit if you bought the dresser before 2002. 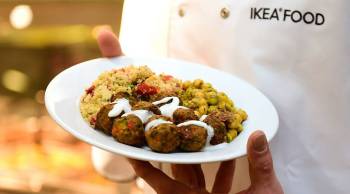 More than the meatballs: The economic enigma of Ikea