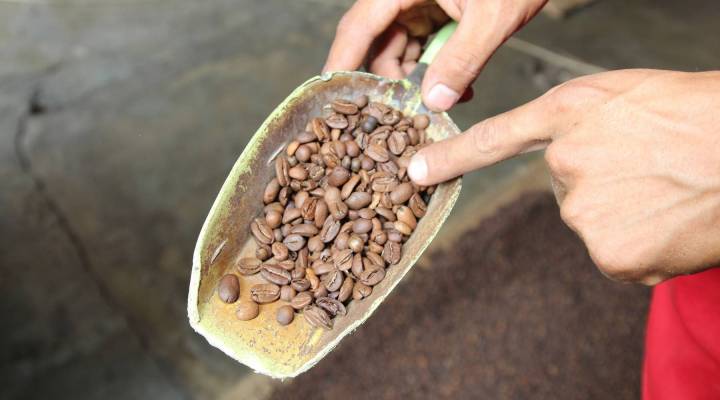 COPY
In the Mexican state of Chiapas, coffee is part of the culture. A buyer showed off a sample of coffee beans he had just bought for distribution within Mexico. Lorne Matalon/Marketplace

In the Mexican state of Chiapas, coffee is part of the culture. A buyer showed off a sample of coffee beans he had just bought for distribution within Mexico. Lorne Matalon/Marketplace
Listen Now

When it works, fair trade coffee works well. The lives of untold thousands of small-scale coffee growers are better for the income and stability that well-run fair trade relationships bring. But some growers in one of the world’s most important coffee growing regions aren’t seeing the benefits of fair trade because of a perfect storm; low prices, a damaging fungus and unscrupulous middlemen.

Fair trade means that coffee lovers like Nisha Kumar pay a little bit more to help the people who grew those beans.

“I like to help support the workers and the growers in other countries,” she told Marketplace in a coffee shop in Montreal, Canada.

Fair trade coffee is still a niche market. People like Kumar represent between five and 15 per cent of that market, depending on the country.

Latin America is a huge fair trade coffee producer. Fair trade means relationships with foreign buyers that extend beyond the sale; cash advances, a steady outlet for the product, a modest but predictable profit, market data. And Chiapas, in the southern part of Mexico, is a major part of the free trade mosaic.

There, coffee farmers are preparing for next Fall’s harvest. I met a trio of growers in Chiapas who were tilling the earth and planting new coffee trees.

Paulino Agustín and Sinael Altamirano prepare ground in the mountains of Chiapas state, a prime coffee growing region in Mexico. They are digging before planting coffee trees which typically don’t produce coffee beans for three years after planting.

“I’m digging and fertilizing,’ Paulino Agustín said in Spanish. The air was sweet, laden with a smoky scent that in part comes from working on a mountainside cloaked in rich, fertile volcanic soil that imparts an aromatic taste to coffee produced here.

It takes three years for these trees to bear fruit. And right now, coffee prices for the beans they have already harvested last Fall are low, Sinael Altamirano lamented

Altamirano said he and his fellow coffee growers are unaware of the coffee price on the world market, information that would help them negotiate with middlemen who buy his non-free trade coffee.

“Aquí no money,” he said in a blend of English and Spanish. “There’s no money here.”

But if prices jumped tomorrow, it wouldn’t matter. This trio has producing trees. But it has already contracted to sell those beans into the low price environment.

César Ulises Roblero (R) and Carlos Galves Hernandez (L) sell beans they acquire from growers from this small processing plant near the Tacaná volcano, a source of rich soil that imparts a distinct aromatic taste to coffee produced here.

“Fair trade, it’s not a perfect system, it’s definitely not a magic wand that can fix all the world’s problems”, fair trade coffee importer Monika Firl  explained. Firl used to live in Chiapas. She moved there to learn the business and ended up helping organize a fair trade coffee co-op. That’s where growers sell their coffee together, sharing the risk and reward. Now she’s back. She works at Cooperative Coffees. It imports free trade coffee from three Chiapas co-ops for coffee shops, groceries and roasters in the U.S. and Canada.

“Prices are set at a commodities market,” Firl explained. “So for the farmer what that means is widely fluctuating prices based more on buying and selling of futures contracts rather than the labor and care the farmers put into the fields.”

César Ulises Roblero pours unprocessed green coffee beans into a storage sack. He said coffee production is a source of pride that helps define a part of the culture of Chiapas.

Firl said the key to making fair trade work is banding together and finding a leader who can negotiate for them honestly with foreign buyers. There are stories strewn across Chiapas about co-op leaders who make money for themselves by cutting their own deals with with go-betweens.

“If these farmers can’t get organized in an effective exporting co-op, they’re essentially left at the mercy of the local middleman, or ‘los coyotes’ as they call them in Chiapas,” she said. Coyote is a term used to denigrate human traffickers, smugglers of all sorts of contraband and here, coffee middlemen.

“We do call call them coyotes”, 72-year-old Ermelindo Mendez said softly in Spanish. “They drive the price down.” A lifetime of coffee cultivation is etched onto his face. And his hands speak to intense labor in the sun-drenched fields of highland Chiapas. But he was torn. He said his co-op just isn’t getting the job done. That’s why he sold to outsiders last year on the side. They paid a higher price than his own co-op could, or would, he’s not sure.

“We’re not benefiting from our work these days”, he said. And now, besides low prices, Monika Firl said, a devastating fungus is wreaking havoc in the coffee field.

“They lose 30, 50 maybe 75 per cent of their total production after years of building up their fields. It’s very demoralizing.”

People have written about the challenges of coffee production for the fair trade market. However, fair trade is giving some small coffee farmers a safety net in a messy market. They earn steady money, good times or bad, while the majority of their neighbors struggle.